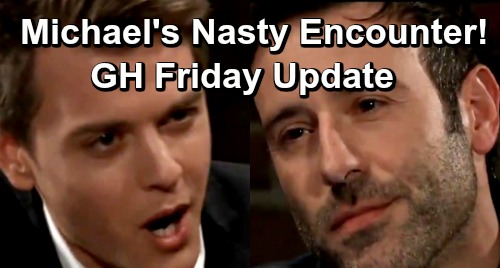 General Hospital (GH) spoilers update for Friday, May 3, tease that Jason Morgan (Steve Burton) will get updates on Shiloh Archer’s (Coby Ryan McLaughlin) recent visit. Shiloh stopped by Sam McCall’s (Kelly Monaco) place to let her know it was time for her trust offering. He wants a pledge like the one he got from Kristina Corinthos-Davis, so Sam will talk to Jason about what happens next.

Jason will argue that Sam has to give something that’ll be helpful to Shiloh. He’ll think that’s why the pledge should be about him. Of course, there are some problems with this strategy. The pledge is supposed to be a secret that could hurt someone Sam cares about. By handing over dirt on Jason, Sam will be proving she still loves him.

However, Jason may not see it like that. He might contend that Sam can frame it as a way to move on. Perhaps Shiloh wouldn’t mind as long as he’s got leverage on Jason. Across town, Shiloh will look as smug as ever during a chat with Michael Corinthos (Chad Duell). They’ll debate what’s best for Kristina Corinthos-Davis (Lexi Ainsworth) as the tension bubbles under the surface.

Other General Hospital spoilers say Kristina will hang out with an old friend. It appears Milo Giambetti (Drew Cheetwood) will be the one to put a smile on Kristina’s face. She’ll relax a bit, which should be good news for the upcoming session. Dr. Neil Byrne (Joe Flanigan) will ask if Kristina’s willing to see her parents, so she’ll get on board and await their arrival.

General Hospital spoilers say the trip will be pretty difficult for Alexis Davis (Nancy Lee Grahn). She knows Harrison Chase (Josh Swickard) and Valerie Spencer (Paulina Bugembe) are going to be watching her like a hawk. Fortunately, Alexis has already found a flaw in their plan. They intend to watch her car, so Alexis will use some trickery to sneak by Valerie on a stakeout.

Meanwhile, Valerie’s eyes will widen over a surprising discovery. She’ll get Chase on the phone ASAP, but this is likely the diversion Alexis set up. Sonny Corinthos (Maurice Benard) will fear something could go wrong, but it won’t – not right now anyway. Alexis and Sonny will be joining Kristina at the safehouse before you know it.

Willow Tait (Katelyn MacMullen) will also head there soon, but not before she has a run-in with Julian Jerome (William deVry). These two will probably keep it short and move it along. Finally, GH fans can expect more heartbreak for Dr. Kim Nero (Tamara Braun). Her apartment will seem awfully empty without Oscar Nero (Garren Stitt) in it, so Kim may not be ready to face that yet.

Luckily, Drew Cain (Billy Miller) will support Kim and urge her to keep living at the Quartermaine mansion. He’ll want Kim to be around people who care and can help. Will love bloom once Kim and Drew start to heal? We’ll keep you posted other GH details emerge. Stick with the ABC soap and don’t forget to check CDL often for the latest General Hospital spoilers, updates and news.