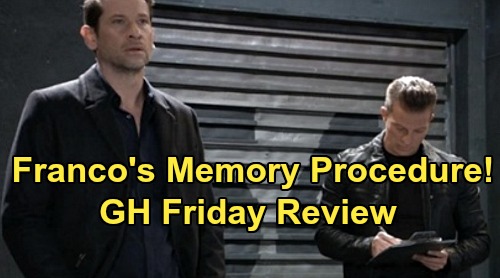 General Hospital (GH) spoilers review for Friday, November 15, reveal that Anna Devane (Finola Hughes) was floored to find Hayden Barnes (Rebecca Budig) in her home wearing Hamilton Finn’s (Michael Easton) shirt. But she was even more blown away when Violet Barnes (Jophielle Love) came cutely running in the room and asked Anna if she was a friend of her daddy’s. Anna had a sweet interaction with little Violet, and then Hayden took Violet and left to give Anna and Finn some privacy.

Finn then explained that if he’d have known Anna was coming, he’d have made sure she wasn’t blindsided. He went on to explain that he found out about Violet three days ago, and that he wanted to tell her face to face. Anna then said that she was happy that Finn had a daughter, but she didn’t love the way she found out about it.

Anna went on to say that she thought Finn would be a wonderful father, and that Hayden seems to know that, too. Finn responded that Hayden was nothing to worry about, but Anna insisted that Hayden still clearly has feelings for him, and now she has really powerful leverage with Violet. At this point, their conversation was interrupted by a call summoning Finn to the hospital, and as Finn left, Anna looked worried.

Meanwhile Hayden and Violet went to GH for a checkup for Violet. Hayden ended up running into Elizabeth Baldwin (Rebecca Herbst) and told her about what had happened at Finn’s house. She went on about how magical it was for Violet to learn about her father, and Elizabeth cautioned her about trying to come between Anna and Finn. Hayden swore that she would never do that, but Elizabeth remained suspicious of Hayden’s motives.

Meanwhile, Franco Baldwin (Roger Howarth) went to the docks and bumped into Jason Morgan (Steve Burton). Franco was feeling pensive and was clearly reflecting on what Scott Baldwin (Kin Shriner) told him about his childhood ordeal. Franco told Jason that the one reason that he (as “Drew Cain”) grew up to be a hero is because Franco already was one. Franco then reflected on how he might be “Drew” but he’s in Franco’s body and that this should be Franco’s life.

While this was going on, Kim Nero (Tamara Braun) was saying her goodbyes at the hospital. She spoke at length with Monica Quartermaine (Leslie Charleson) and they had a touching conversation about the importance of Oscar Nero Quartermaine (Garren Stitt) in both of their lives. Later, Kim returned home to her empty apartment, when Franco showed up at the door. Kim could tell by his demeanor that something was terribly wrong.

It certainly looks like Franco is on the verge of consenting to the memory reversal procedure, and that is something that’s going to be nearly impossible for Kim to comprehend, let alone accept. She’ll likely feel that she’s losing “Drew” all over again, and this additional loss might be more than Kim can take right now.

Finally, Alexis Davis (Nancy Lee Grahn) got a visit in the hospital from Julian Jerome (William deVry), who was feeling particularly grumbly about Olivia Quartermaine (Lisa LoCicero), who he blamed for the rash of dead rats in the alley behind Charlie’s Pub. Alexis kidded Julian about the rats, then talk turned to all of the changes going on in his life lately.

Later, TJ Ashford (Tajh Bellow) and Neil Byrne (Joe Flanigan) came to visit with Alexis, fresh from a visit to Alexis’ home where they searched for anything that might have poisoned Alexis. On TJ’s way out, Alexis made a joke about rats, clearly still thinking about Julian’s situation, and a lightbulb went off in TJ’s head. He said that she could have been exposed to rat poison, which stunned Alexis.