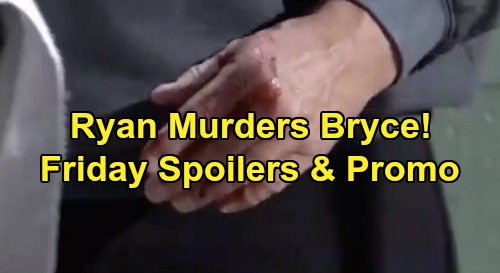 General Hospital (GH) spoilers for Friday, October 18, tease that Jason Morgan (Steve Burton) will feel confident Sam McCall’s (Kelly Monaco) going to be released soon. He’ll keep his optimism in check, but he’ll definitely hope it all works out. Jason will assure Sam and Alexis Davis (Nancy Lee Grahn) that the feds are about to learn they have no case. He’ll count on Bryce Henderson (Brian Gross) to be their secret weapon, but there’ll be an unexpected setback.

Ryan Chamberlain (Jon Lindstrom) just got a new cellmate who made the mistake of admiring Ava Jerome’s (Maura West) Crimson cover. Bryce suggested maybe he would look Ava up when he got out and show her a good time. Naturally, Ryan couldn’t have that! He gave Bryce a menacing look as he gripped his pen tightly.

GH fans will see the gruesome aftermath in Friday’s episode. Ryan will wipe a bloody hand and sarcastically note that something terrible has happened. It sounds like Bryce will be a corpse by then, so Jason’s plan is going right out the window. It won’t be long until Ryan’s restrained and Harrison Chase (Josh Swickard) shows up to investigate.

Meanwhile, General Hospital spoilers say Laura Webber (Genie Francis) will want to help. She’s doing her best to be there for Ava, who’s struggling since dead Kiki Jerome (Hayley Erin) hates her and her daughter’s killer adores her. Ava will admit she’s still on Ryan’s mind and seek Laura’s guidance on how to cope. She’ll just want some of this pain to go away, so Laura will offer support however she can.

However, Brad later altered results during Sasha’s deadly illness. Liesl Obrecht (Kathleen Gati) blackmailed Brad into it, so he certainly doesn’t want to expose her and risk the baby swap secret. He’ll play dumb with Curtis, but you can bet the P.I. will suspect more deception.

Jordan Ashford (Briana Nicole Henry) will tell Curtis that this town is riddled with liars, and she’s not wrong. Nevertheless, Curtis will keep working to find out the truth about Sasha’s scam and Valentin’s involvement. At Charlie’s Pub, Brad will stand up to Julian Jerome (William deVry). He’ll reject Julian’s demand, which will spark some anger. Julian will growl that Brad doesn’t tell him no, but Brad will point out that he just did.

Brad may argue that Julian’s in this just as deep, so he really doesn’t have any leverage. He won’t think Julian would actually kill Lucas Jones’ (Ryan Carnes) husband either, so it seems he’ll feel untouchable. Finally, Carly Corinthos (Laura Wright) will be a meddling mom. She’ll be appalled when she realizes Michael Corinthos (Chad Duell) is standing by lying Sasha’s side.

Carly will push Michael to walk away and never look back. After everything that went down with Nelle Benson (Chloe Lanier), Carly will think Michael’s a fool to date another con artist. Michael, on the other hand, will argue that Sasha’s different. Carly’s heard this familiar spiel before, so she may worry Michael’s trusting nature is getting him in trouble again.

General Hospital spoilers say Carly will ultimately have to let Michael make his own choices. He’ll remain committed to Sasha for now, so it’ll be interesting to see how long that lasts. We’ll give you updates as other GH news comes in. Stay tuned to the ABC soap and don’t forget to check CDL often for the latest General Hospital spoilers, updates and news.