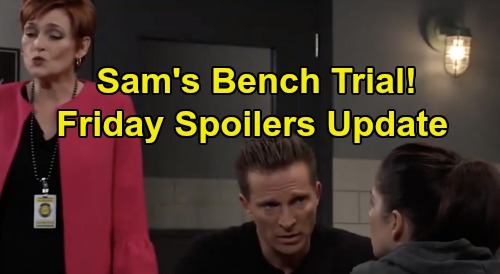 General Hospital (GH) spoilers update for Friday, October 25, teases that Sam McCall (Kelly Monaco) will get some legal guidance. Diane Miller (Carolyn Hennesy) knows this time at Pentonville is taking a toll on Sam as well as Jason Morgan (Steve Burton). Jason hates that Sam could be sitting behind bars for months, but Diane will suggest there’s a way around that.

Sam and Jason will be all ears, so Diane will explain her strategy to speed things along. She’ll suggest that Sam should opt for a bench trial instead of a jury trial – and there are some good reasons why. By allowing a judge to decide her fate, Sam’s court date will arrive much sooner. Plus, Diane might argue that a judge would have a better grip on the facts. Bench trials are often helpful if a case is particularly complicated – and this case is indeed complicated!

Diane will feel confident that a judge will side with her client, so Sam will take the advice. Meanwhile, there’ll be some other court drama going on. Kim Nero (Tamara Braun) was just asked about drugging Drew Cain (Billy Miller) and trying to force him to have a baby. Elizabeth Baldwin (Rebecca Herbst) hates that Scott Baldwin’s (Kin Shriner) having to play dirty, but Kim should’ve thought about that before she slept with Liz’s husband.

General Hospital spoilers say Kim will admit Scott’s right. She indeed drugged Drew and hoped to conceive another child with him that night. Of course, Kim will be glad her plan didn’t pay off. She’ll recognize it was a terrible decision – one that was made in the pit of despair. Kim was at the end of her rope after Oscar Nero Quartermaine (Garren Stitt) died, so she lost it for a bit.

Scott will call Kim’s mental stability into question and argue that she’s the one pulling the strings here. Martin Gray (Michael E. Knight) will insist that “Drew” is the one who’s competency must be decided. He’ll try to undo some of the damage, but Scott will keep fighting. Kevin Collins (Jon Lindstrom) will get on the stand next, and he’ll be asked whether this man is in complete control of his faculties.

Kevin might think that depends on your point of view. If you believe he’s “Drew” due to his memories, then he’s perfectly fine to make his own decisions. However, this is technically Franco Baldwin’s (Roger Howarth) case – and Franco’s definitely not capable of making his own choices right now. His mind is totally out of the picture.

Later, General Hospital spoilers say the judge will deliver her ruling. Since Liz is set to face a difficult defeat, it sounds like the judge will side with “Drew.” Across town, Lucy Coe (Lynn Herring) will approach Maxie Jones (Kirsten Storms) and suggest she’s about to make her dream come true. She’ll have some plan cooked up that she thinks would be just perfect for Maxie.

Peter August (Wes Ramsey) will head Lucy’s pitch as well, but how will he feel about it? If it keeps Maxie distracted and off his trail, Peter should be all for it. If it’s something that could lead to trouble, Peter will surely advice against it. Right now, Peter’s top goal is keeping Maxie in the dark. He’ll do just about anything to preserve his bright future with Maxie.

Other General Hospital spoilers say Valentin Cassadine (James Patrick Stuart) and Laura Webber (Genie Francis) will face off. It appears Jasper “Jax” Jacks (Ingo Rademacher) will be at the center of the conflict. Valentin will talk about “the hell he is trying to raise,” so he might pressure Laura to steer clear of Jax and all his scheming.

Nevertheless, Laura will keep doing her part to find the codicil. She certainly won’t let Valentin intimidate her. Finally, GH spoilers say Lulu Spencer (Emme Rylan) will surprise Dustin Phillips (Mark Lawson). He won’t be able to go out on a date, so she’ll just bring the date to him instead.

Dustin’s teaching job will have him wrapped up in some school stuff, but Lulu will use this workaround to give him some company. The pair will grow closer, but how long until this blissful bubble bursts? We’ll give you updates as other GH news comes in. Stick with the ABC soap and don’t forget to check CDL often for the latest General Hospital spoilers, updates and news.