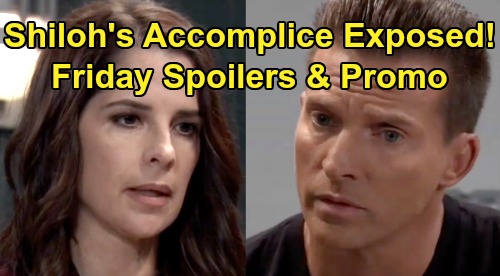 General Hospital (GH) spoilers for Friday, October 4, tease that the wedding of Valentin Cassadine (James Patrick Stuart) and Nina Reeves (Cynthia Watros) will be ready to kick off. The wedding party will gather at the church for photographs, and everyone will be feeling festive – that is, everyone but Lulu Spencer (Emme Rylan). She’s just found out that Sasha Gilmore (Sofia Mattsson) isn’t really Nina’s daughter, but she’s decided to keep her mouth shut about the whole thing, at least for now.

But will she really allow the wedding to happen and let Nina marry Valentin knowing what she knows? It looks like she’ll at least want to bust Valentin, as she’s shown in Friday’s preview telling him that “you won’t feel that way after you hear what I have to say.” Of course, whether Lulu is ultimately able to keep her mouth shut throughout the ceremony remains to be seen – but it looks like she’ll have a tough time with it.

Meanwhile, Nina will have a pre-wedding talk with her best bud, Curtis Ashford (Donnell Turner). Curtis doesn’t trust Valentin at all, and he’s deeply worried that Valentin will end up hurting Nina, so he may have a few cautionary words for his friend before the ceremony. Nina, however, won’t want to hear it, as she’ll be completely focused on having a beautiful and perfect day.

At the Corinthos compound, Jasper “Jax” Jacks (Ingo Rademacher) will have some pointed questions for his daughter Josslyn Jacks (Eden McCoy). Jax knows that something is off with Dev Corbin (Ashton Arbab), and that Josslyn is helping to conceal something about the teen, but he doesn’t know what.

Furthermore, Jax doesn’t like it that Josslyn is being required by Sonny Corinthos (Maurice Benard) and Carly Corinthos (Laura Wright) to keep secrets. On Friday’s GH episode, Jax will confront Josslyn with his suspicions and tell her that he knows that she’s covering something up about Dev. We’ll see if Josslyn end up spilling the beans to her dad.

Later, Jax will visit with Carly at the hospital, and he might try to fish for information about Dev from her as well. She’s shown in Friday’s GH previews sarcastically thanking Jax for his visit, so it doesn’t look like she’ll like everything she hears from him. Meanwhile, Sonny will be visiting with Mike Corbin (Max Gail) at Turning Woods. He’ll note that he and Carly have a surprise for Mike, so it looks like Sonny will pass on the good news about their new baby, Donna Corinthos (Ella and Emma Hulen).

At the police station, Diane Miller (Carolyn Hennesy) will pay Sam McCall (Kelly Monaco) a visit. Sam’s currently being held in connection with Shiloh Archer’s (Coby Ryan McLaughlin) murder, and something’s just off about the recording that the police received of Sam allegedly saying that she wanted Shiloh dead. Diane will re-question Sam about the whole thing, hopefully to unearth some new detail that might help her case.

Throughout the conversation, it seems that Sam will remember something that Shiloh said. She’ll remark that Shiloh mentioned something during their ordeal on The Haunted Star that made her think he had an accomplice. This could be about the money that Shiloh was waiting for from Peter August (Wes Ramsey) – Sam may remember that Shiloh seemed to be waiting for someone that night.

Finally, Jason Morgan (Steve Burton) will go to see Dev and question him about something, which will likely be about his own observations during that night on The Haunted Star. GH viewers will remember that Dev bumped into Peter that night, too, when he was taking Wiley Cooper-Jones (Theo and Erik Olson) to safety, so Jason may have some questions about that.