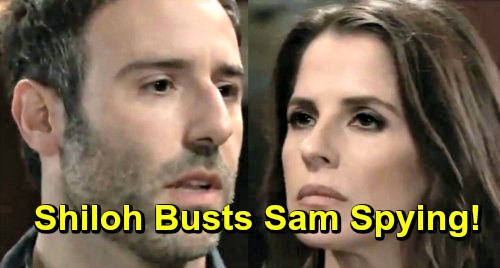 General Hospital (GH) spoilers tease that Sam McCall (Kelly Monaco) will botch the next phase of her scheme. Thanks to Shiloh Archer’s (Coby Ryan McLaughlin) giant ego, Sam’s seemingly been able to fool him so far. Shiloh’s the kind of guy who believes he can win over just about anyone. Sam has done enough to prove herself, so Shiloh’s lowering his guard and drawing her even closer.

GH fans can expect Sam to take advantage of her position at Dawn of Day. She’s learning the ins and outs of this place, so she’ll be able to get in the DoD records room. Sam might find it and break in on her own, or she might dupe some other cult sucker into opening it for her. It’s a gullible crowd, so that wouldn’t be out of the question.

Regardless, General Hospital spoilers say Sam will get the chance she needs. She’ll plan to get her hands on Kristina Corinthos-Davis (Lexi Ainsworth) trust offering. Sam can’t truly destroy the evidence since Shiloh would still have the recording, but she can least look at the file. Just knowing what they’re up against would help. They’d get a grip on how bad the damage would be if things went sideways.

Shiloh will be busy recruiting and schmoozing across town, so Sam will have a little time. Unfortunately, she won’t have quite enough. General Hospital spoilers say Sam will be caught red-handed. She’ll be busted by Shiloh, who’ll demand an explanation for this. GH viewers may get a glimpse of that menacing side we’ve seen when Shiloh’s with Willow Tait (Katelyn MacMullen).

However, Sam won’t let Shiloh see her sweat. General Hospital spoilers state that Sam will come up with a brilliant cover story. She’ll manage to brush off this incident as nothing – with a little help from Shiloh’s attraction to her of course. Sam will likely convince Shiloh that she was being helpful in some way, so it won’t be long until he’s back to his usual charming yet disturbing self.

Sadly, it doesn’t look like Sam will be able to sneak a peek at Kristina’s file. She’ll still need a way to learn more, so she’ll be prepared to take drastic action. Jason Morgan (Steve Burton) and Sonny Corinthos (Maurice Benard) will worry about how far Sam could take this!

Will protecting Kristina put Sam in grave danger? Will Shiloh catch on soon and start playing Sam, too? We’ll give you updates as other GH news comes in. Stay tuned to the ABC soap and don’t forget to check CDL often for the latest General Hospital spoilers, updates and news.