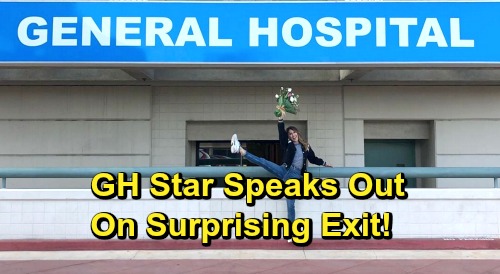 General Hospital (GH) spoilers reveal that one ABC soap star decided to speak out on her exit. When Elizabeth Hendrickson’s return to The Young and the Restless was announced, many fans wonder what that’d mean for her role as Margaux Dawson on GH. Hendrickson initially hoped to juggle both shows, but General Hospital chose to write her out. The DA resigned, so Hendrickson has wrapped her run.

A General Hospital show rep told Soap Opera Digest that although Hendrickson was departing as Margaux, “That doesn’t mean she’s gone for good.” However, the tone of Hendrickson’s Instagram post was a bit more final. She included a fun pic of herself outside the studio and reflected on her time at GH in the caption.

“It was an incredible year at @generalhospitalabc playing Margaux,” Hendrickson said. “Thanks to all my new friends, It was truly one of the best experiences I’ve ever had. On to the next !” Hendrickson doesn’t sound like she expects to make a comeback – at least not anytime soon. That may be partly because Y&R will have her tied up for a while.

Since all the Shiloh Archer (Coby Ryan McLaughlin) drama’s heating up in Port Charles, that may have been a factor in Margaux’s departure. GH will need a DA as trouble continues to follow Shiloh and his enemies. If we can get one who’s never been connected to Dawn of Day, that’d be great. Most of us would like to see someone who’s committed to nailing this guy from the get-go.

Of course, there’s a chance Margaux could follow a new path and still end up back in PC. She doesn’t necessarily have to be the DA. Tamara Braun (Dr. Kim Nero) is certainly hoping this isn’t the last we’ve seen of Margaux. She replied with some kind words about that in the comments.

Braun said, “You’ll be back! You’d better be back! You’re one of the good ones. Talent and heart. Big hugs and lots of love!” Parry Shen (Brad Cooper) also chimed in with a sweet message and what was apparently an inside joke. “We’ll miss you — Mt. Fuji, 4eva !! xoxo,” Shen said. It’s clear that Hendrickson will be missed on set.

It was an incredible year at @generalhospitalabc playing Margaux. Thanks to all my new friends, It was truly one of the best experiences I’ve ever had. On to the next ! 💐💕