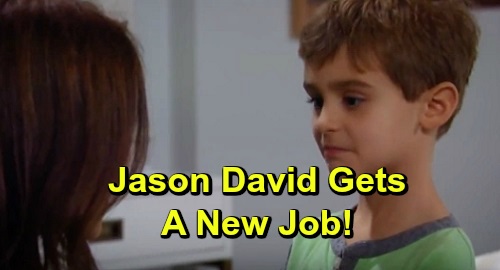 David is always a scene-stealer, so it’s no surprise that he’s booked a new series to show off his talent. He’s joined the cast of an intriguing sci-fi drama called For All Mankind. David plays the part of Daniel Stevens and will be featured in three episodes of this exciting project. Those episodes are called Red Moon, He Built the Saturn V and Prime Crew.

For All Mankind has been produced for Apple TV+ and will debut on November 1, so that’s not too far away. General Hospital fans may want to check out this exciting show, which explores what would’ve happened if the global space race hadn’t ended.

In this alternate universe, Russia succeeds in the first manned moon landing. That forces the U.S. to work another angle and sets up a rush to put the first woman on the moon ASAP. The show’s official synopsis explains a bit more about what this series is trying to achieve. It teases, “Told through the lives of NASA astronauts, engineers and their families, For All Mankind presents an aspirational world where NASA and the space program remained a priority and a focal point of our hopes and dreams.”

Of course, no recast plans have been buzzed about for Aiden. These episodes have already been filmed, so it won’t affect any future GH episodes David’s called to shoot. However, it’s great that David is picking up some extra gigs and getting even more acting experience. He’ll definitely be one to watch as he grows up. David’s already a fine young performer and will undoubtedly keep up the good work!

As for what’s next in Port Charles, General Hospital spoilers say Elizabeth Baldwin (Rebecca Herbst) will keep fighting for her family. She’s determined to bring Franco back not just for herself, but for her boys as well. We’ll give you updates as other GH news comes in. Stay tuned to the ABC soap and don’t forget to check CDL often for the latest General Hospital spoilers, updates and news.