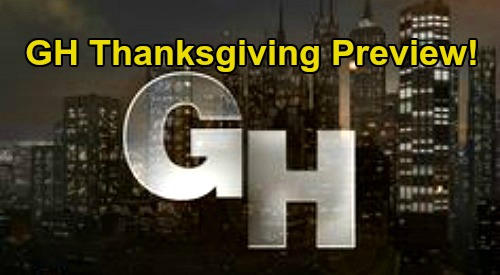 General Hospital (GH) spoilers tease that Thanksgiving is just around the corner, so it’s time to start thinking about the holidays in Port Charles. November 27 will bring a special Thanksgiving episode, and it’s sure to warm fans’ hearts. Of course, there’ll be some drama thrown in as well! It just wouldn’t be Port Charles without it. We’ve got a preview of all the action, so here’s sneak peek at the Thanksgiving fun.

For starters, the Corinthos clan will have an extra reason to celebrate this year. It’s Donna Corinthos’ first Thanksgiving! Donna obviously won’t know what’s going on, but her family will enjoy having her there just the same. Sonny Corinthos (Maurice Benard) and Carly Corinthos (Laura Wright) will have another blessing to count as the family gathers for a celebration. Donna has completed the Corinthos fam and will hopefully bring them joy for many years to come.

Across town, the Quartermaines will try to put out traditional Thanksgiving spread and fail miserably. It won’t be long until those pizza boxes arrive, but it’s a great tradition for GH fans to enjoy. As always, there’ll be so much to be grateful for at the Quartermaine mansion.

Will Monica Quartermaine (Leslie Charleson) invite “Drew Cain” aka Franco Baldwin (Roger Howarth) to attend? “Drew” may not have a happy Thanksgiving since trouble’s set to hit right before. General Hospital spoilers say “Drew’s” life will be in danger – most likely after he voluntarily submits to the procedure and intensifies his Drew memories. That could certainly provoke Peter August’s (Wes Ramsey) wrath!

However, the fact that peril will strike right before Thanksgiving could be a good sign. Elizabeth Baldwin (Rebecca Herbst) and her boys deserve a holiday miracle! Whether it comes at Thanksgiving, Christmas or somewhere in between, General Hospital spoilers say it’s definitely coming.

In the meantime, we should talk about some other possible Thanksgiving shockers. Nikolas Cassadine (Marcus Coloma) is alive and well, so Laura Webber (Genie Francis) really deserves to know the truth. Will Laura get a Thanksgiving reunion with her son? It’d be cruel for GH to rob viewers of that, so we sure hope so!

Finally, General Hospital spoilers Hamilton Finn’s (Michael Easton) heart will be full this Thanksgiving. He’ll get to spend his first turkey day with Violet Finn (Jophielle Love), so it’ll be a special holiday indeed. Finn may find himself torn between Hayden Barnes (Rebecca Budig) and Anna Devane (Finola Hughes), but he won’t let the mess stop him from enjoying Thanksgiving with his daughter.