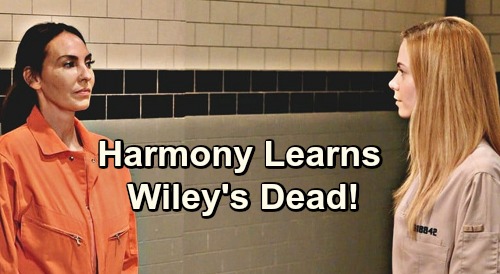 General Hospital (GH) spoilers tease that Harmony Miller (Inga Cadranel) will have a chat with Nelle Benson (Chloe Lanier). These two were just introduced at Pentonville, so it’ll be time to get to know each other soon. Of course, Nelle knows “Wiley Cooper-Jones” (Theo and Eric Olson) is actually Jonah Corinthos. She also knows the real Wiley is dead, so she’s got info Harmony would be interested in.

Harmony and Nelle will have plenty of time on their hands, so that could lead to some surprising confessions. Will Nelle give Harmony a weapon against Shiloh Archer (Coby Ryan McLaughlin)? Will Harmony make Shiloh pay for letting her take the fall?

Harmony confessed to drugging Sam McCall (Kelly Monaco) and Kristina Corinthos-Davis (Lexi Ainsworth) to keep Shiloh out of prison. Unfortunately, Shiloh doesn’t plan to help Harmony at all. He’s only concerned about finding Willow Tait’s (Katelyn MacMullen) baby, which she gave up for adoption.

Harmony Miller Gets The Upper Hand

However, Harmony can still get the upper hand here. She could find out important information that Shiloh has no idea is even possible. Nelle already made friends with Ryan Chamberlain (Jon Lindstrom) and will also befriend Harmony. Could Harmony tell Nelle about her mentor and his search for his son?

Nelle could easily put it all together and figure out Brad Cooper’s (Parry Shen) adopted dead baby was Willow’s child. Could Nelle tell Harmony that Willow’s baby died? Nelle probably doesn’t want her kid raised by a cult leader, especially if his followers confess to things as Harmony has done.

Brad wants Nelle’s assurance that she won’t come after the baby herself, but he can’t be sure of anything at all when it comes to Nelle. She dropped hints about having a role in “Wiley’s” life, so Brad will remain on edge. If Nelle determines that Shiloh is going after “Wiley,” could it push her to break out of Pentonville and kidnap her son?

General Hospital spoilers say Nelle will indeed make her escape soon, so a Shiloh shocker might drive her to it. If Nelle does end up kidnapping “Wiley,” could it set up the big reveal?

It’s possible, but it’s also possible Nelle will spin a story when she’s inevitably captured. She might lie about wanting a replacement baby or just leave “Wiley” somewhere to avoid those extra charges.

“Wiley” could even be at risk of kidnapping by Shiloh and his followers. Still, it’s unlikely that Michael Corinthos (Chad Duell) will find out about Jonah just yet. General Hospital spoilers say the Dawn of Day storyline will continue through the summer, so GH has much more to explore.

A DNA test will likely go down at some point. Will the test prove “Wiley” isn’t Shiloh’s child? That depends on whether or not it’s tampered with! Brad knows what could happen, so we’ll see how he handles the looming obstacle.

As for Harmony, she could certainly use the death of Shiloh’s child as revenge for letting her take the fall. She could even keep the lie going until she finds the perfect moment to destroy Shiloh’s dreams.