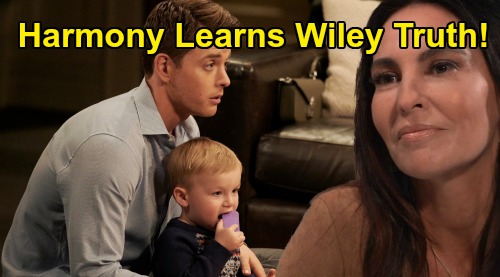 Now that Harmony’s out of Pentonville, she naturally needs a job and a way to move forward. Harmony revealed that she nailed her interview at Turning Woods, which is where her interaction with Willow and Sam went down.

Harmony scored a position there, so this opens up some interesting story possibilities on General Hospital.

After they all received text invites to Shiloh Archer’s (Coby Ryan McLaughlin) memorial service, Harmony got grilled about her potential involvement. She assured Willow and Sam that she had nothing to do with this.

Harmony has seen the light about Shiloh and declared that “Wiley Cooper-Jones” (Erik and Theo Olson) was the only good that had ever come from him.

So let’s look at our puzzle pieces here. We’ve got a mom who desperately wants to repair the damage with her daughter and protect her from more pain. Harmony knows how much Willow loves “Wiley” and has fought to keep him safe. She also happens to be working at the same place Lucas Jones (Ryan Carnes) was admitted to.

Brad Cooper (Parry Shen) was already spotted at Turning Woods and will undoubtedly be stopping by frequently. He’ll hold out hope that Lucas will come out of his coma and return to his loved ones. Brad could easily mention his pre-crash confession during another visit with Lucas.

Will Harmony be within earshot when it happens? Will Harmony discover that “Wiley” isn’t Willow and Shiloh’s son? Harmony just might find out “Wiley” is actually Jonah Corinthos, the son of Michael Corinthos (Chad Duell) and her former cellmate, Nelle Benson (Chloe Lanier).

Although Harmony has tried to turn over a new leaf, this would be a pretty complicated situation. Harmony would realize how much a blow like this would devastate Willow.

Since “Wiley” still ended up in a loving home, it’s not like the kid’s being neglected. “Wiley” even spends a great deal of time with his godfather and secret bio dad, Michael.

If Harmony gets the full picture, that may be good enough for her. Harmony might decide to keep quiet about this secret to prevent Willow’s broken heart. She might even recall Nelle trash-talking the Corinthos clan and assume that they’re bad news – people “Wiley” needs to be kept away from. Sonny Corinthos (Maurice Benard) is a dangerous mobster after all!

Of course, Harmony could spark a disaster if she indeed stays tight-lipped. Her deception will inevitably come out, and Willow will be furious over Harmony keeping Michael from his child. General Hospital spoilers say Harmony’s new job could bring some major curveballs.