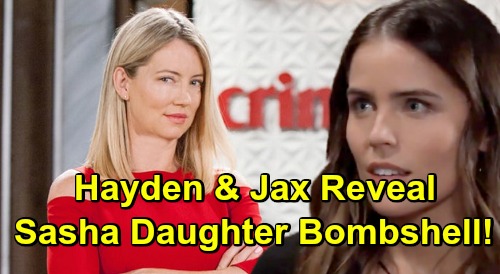 They’ve faced a few hiccups at Crimson, but things will start moving in the right direction again. Jax and Nina will really find their groove in terms of their working relationship.

Naturally, that won’t go over well with Valentin – especially since he knows Jax has a file on him along with one on Cassandra Pierce (Jessica Tuck). Valentin will hope he can nip Nina and Jax’s connection in the bud. He’ll decide to come clean about what Curtis Ashford (Donnell Turner) has been up to and divulge this shocking file news.

Nina will be taken aback by Valentin’s updates, but she’ll want to get the whole story before she jumps to too many conclusions. General Hospital spoilers say Nina will go straight to the source. She’ll confront Jax, but he’ll claim he doesn’t have a clue about the file or anything to do with Cassandra.

Nina won’t be sure what to believe at that point, so she’ll turn to the one person she can trust in all this. GH fans can expect another side gig for Curtis. Nina will instruct him to keep digging, but she’ll want Curtis to present any evidence he finds to her first. That way Nina can trust that the story won’t be altered to fit Valentin’s narrative. She loves Valentin, but they’re always going to have trust issues.

In the meantime, General Hospital spoilers say Jax will keep plotting behind Valentin and Nina’s back. He’ll hire Hayden Barnes (Rebecca Budig) as Aurora’s CFO, which Drew Cain (Billy Miller) won’t be too happy about.

Hayden And Jax Play A Role In Sasha Secret Reveal?

Nevertheless, Jax will get his way and focus on his next move. He’ll resume scheming with Hayden, so they’ll have a private conversation about their mutual goal: Valentin’s brutal take-down.

There’s a good chance Hayden and Jax will play a role in how Valentin’s secret is revealed. They’ll be looking for any evidence that could topple Valentin’s world, and the Sasha Gilmore (Sofia Mattsson) shocker would certainly do it.

Cassandra will likely be part of the big picture as well. Hayden and Jax will resolve to make Valentin suffer for reasons that’ll become clear soon enough.