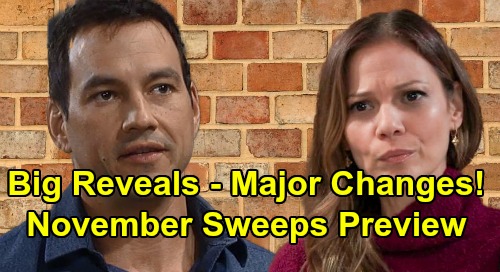 General Hospital (GH) spoilers tease that the fall drama will heat up in the weeks ahead. GH fans have been waiting on some big reveals and many of those will finally play out. November sweeps will bring plenty of shockers, so let’s look at a preview of all the action.

For starters, let’s talk about Michael Corinthos’ (Chad Duell) love life. He understands that Sasha Gilmore’s (Sofia Mattsson) situation was complicated and doesn’t hold her lies against her. Michael has chosen to stand by his love, but for how long? General Hospital spoilers say we’ll see some problems hit soon enough.

There’s a good chance those problems will relate to Sasha’s latest round of deception. She didn’t want to cause any more damage, so she assured Nina Reeves (Cynthia Watros) that she acted alone. As that lie becomes harder to keep, Michael may lash out. He didn’t think it was the right call, so Sasha could be hearing “I told you so” eventually.

There’s a good chance Michael will grow closer to Willow Tait (Katelyn MacMullen) in the midst of all this. Willow tends to serve as Michael’s sounding board when he’s got something on his mind. She’s been helpful about giving him Sasha advice before, so Michael may turn to her once again. However, the real point here will likely be to strengthen Michael and Willow’s bond.

Of course, both Willow and Michael could face a major revelation before long. The “Wiley Cooper-Jones” (Theo and Erik Olson) secret seems to be on the verge of exploding. General Hospital spoilers say Lucas Jones (Ryan Carnes) will grow increasingly suspicious, but he’ll have the wrong idea. He seems to think Brad Cooper (Parry Shen) might be cheating on him, so that won’t help Brad’s dilemma.

Lucas will let his suspicions simmer until he just can’t take it anymore. He’ll ultimately spew his accusations, so Brad will be in a real bind. As usual, Brad will seek Julian Jerome’s (William deVry) assistance. He always counts on Julian to clean up his messes, but it never works out like either one of them expects.

Following Ava Jerome’s (Maura West) Halloween shocker, Laura Webber (Genie Francis) will get a shock of her own. General Hospital spoilers state that Laura will reel over a bombshell this November. That backs up the idea that Nikolas Cassadine could return as previously speculated. Whether Nikolas comes back in the form of Tyler Christopher or a recast, it would certainly be welcome news for many viewers.

Meanwhile, Peter August’s (Wes Ramsey) secrets will catch up with him. With Jason Morgan (Steve Burton) and others hot on his trail, Peter will feel like he’s at the end of his rope. General Hospital spoilers say Maxie Jones (Kirsten Storms) will become quite troubled by Peter’s behavior. She may decide to investigate for herself – and we all know Maxie never stops until she gets what she wants!

As for Lulu Spencer (Emme Rylan), her relationship with Dustin Phillips (Mark Lawson) will deepen. Unfortunately, Lulu will also land in a risky predicament. Could she get caught up in the Peter mess? Regardless, Peter will make some dark moves as he works to cover his tracks. Despite his best efforts, exposure is indeed looming for Peter. Let’s hope Jason gets Sam McCall (Kelly Monaco) off the hook ASAP.

Other General Hospital spoilers say Hamilton Finn (Michael Easton) will try to find a new normal. Thanks to Hayden Barnes’ (Rebecca Budig) secret, Finn will have a lot of catching up to do with his daughter, Violet Finn (Lophielle Love). He’ll have to figure out fatherhood and find a way to get past Hayden’s lies, too.

Elsewhere, Nina will play a dangerous game. There’s no confirmation on Nina’s manipulation just yet, but it definitely seems like she’s faking forgiveness. Nina made it clear to Jasper “Jax” Jacks (Eden McCoy) that she knows exactly what she’s doing.

It would be weird for Nina to just accept Valentin’s deception as fact on the spot. It took Valentin forever to win Nina back the last time he lied; he even had to throw in a fake daughter! Nina appears to be taking a smarter approach this time around. General Hospital spoilers say Valentin may be heading into a vengeful trap, which can only lead to heartbreak.

Finally, Franco Baldwin (Roger Howarth) will inch back toward his family. With Kim Nero (Tamara Braun) likely set to exit GH, “Drew Cain” may volunteer to become his true self again – at least according to his DNA. “Drew” doesn’t feel like Franco, but he might choose to have the memory procedure and return to Elizabeth Baldwin (Rebecca Herbst) anyway.