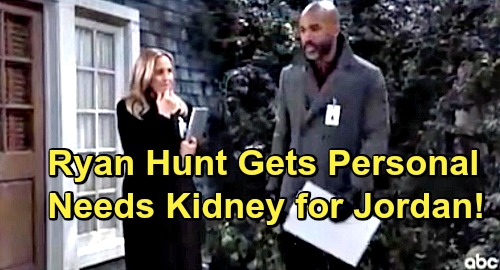 General Hospital (GH) spoilers tease that Jordan Ashford’s (Briana Nicole Henry) health situation is getting dire. She’s in need of a donor kidney and fast, and for a while it looked like she was on the path to getting one. Kevin Collins (Jon Lindstrom) was a match and was willing to donate one of his kidneys, but a problem soon materialized. Kevin is pre-diabetic and that precludes him from being a donor.

But if Kevin’s a suitable match for Jordan, then that can only mean one thing…that his twin Ryan Chamberlain (Jon Lindstrom) is also a match. Of course, the logistics of getting Ryan back in Port Charles and then getting him to agree to be a donor for Jordan would be harrowing, as Ryan probably wouldn’t want to help Jordan or anyone else for that matter.

But that probably won’t stop everyone from intensifying the manhunt for Ryan. For Curtis Ashford (Donnell Turner) especially, it will make the search for Ryan much more personal. He’ll now have extra incentive for tracking down Ryan and bringing him in alive so he can be a donor for Jordan. Laura Collins (Genie Francis) will also want to help her friend and colleague by securing her donor.

And according to General Hospital spoilers, they’ll be successful in doing so, as Ryan will indeed resurface in Port Charles. Right now, Ava and Kevin are doing a good job of flaunting their faux relationship all over social media, with the goal of enraging Ryan so he comes back for Ava. They’ll attend the Nurses’ Ball together, which Ryan will surely notice.

Of course, Ryan coming back and actually getting captured or killed so his kidney can be donated to Jordan are two separate matters. Ryan’s particularly good at eluding the authorities, so he could be back in Port Charles a while before anyone’s the wiser.

We’ll see how this all plays out, but unless another suitable donor emerges, it looks like Ryan may be Jordan’s only hope. Do you think that Ryan’s kidney will save Jordan’s life? Stay tuned to the ABC soap and don’t forget to check CDL often for the latest General Hospital spoilers, updates, and news.