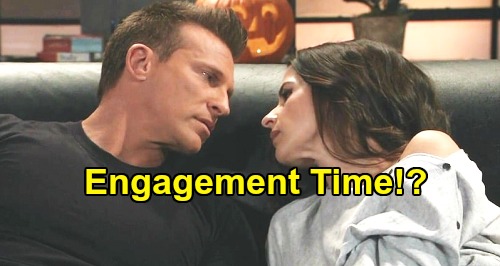 General Hospital (GH) spoilers reveal that Jason Morgan (Steve Burton) and Sam McCall (Kelly Monaco) deserve some happiness after all this Shiloh Archer (Coby Ryan McLaughlin) drama. Their relationship has remained strong throughout their nightmare, but it’d be nice to see some positive developments. GH could use this as an opportunity to kick off an exciting new chapter for “JaSam.”

What would you like to see next for this duo? As a General Hospital couple grows closer, an engagement is the obvious next step. Should Jason pop the question? Sam would undoubtedly accept a marriage proposal from the man she loves. The engagement news would absolutely thrill Carly Corinthos (Laura Wright), Sonny Corinthos (Maurice Benard) and all the “JaSam” shippers out there.

Of course, Sonny and Carly currently have a baby on the way. Jason and Sam wouldn’t want to steal the spotlight as Carly bring this new child into the world. However, there’ll be plenty of time for a proposal after the baby drama. In fact, a “JaSam” engagement might lift Carly and Sonny’s spirits.

There have been plenty of hints that things aren’t going to go well for “CarSon.” Will their baby survive? If so, for how long?

This pregnancy storyline was a weird choice for Sonny and Carly. There was never any real reason for it. Only loyal fans of the pairing seem to be interested in watching them add to their brood.

General Hospital may have had a devastating loss in mind from the get-go. It could give Carly and Sonny some good drama as we head into November sweeps. Naturally, that’d leave everyone desperate for some happiness. Some good old-fashioned question-popping may be just what the doctor ordered! It’d be sweet to watch Jason put a ring on it and plan to make Sam his wife once again.

A Christmastime wedding might be a cute option for Sam and Jason. The holidays are a heartwarming time anyway, so this would just be the icing on the cake. Jason and Sam could then kick the new year off right – as husband and wife! It’s something many General Hospital viewers would like to see.

What do you want to see next for Jason and Sam? How about an engagement and a wedding? We’ll give you updates as other GH news comes in. Stay tuned to the ABC soap and don’t forget to check CDL often for the latest General Hospital spoilers, updates and news.