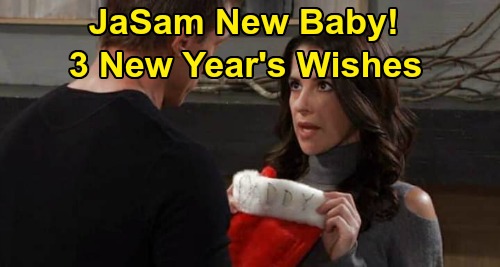 General Hospital (GH) spoilers reveal that “JaSam” fans are desperate for some happiness! It feels like Jason Morgan (Steve Burton) and Sam McCall (Kelly Monaco) have been suffering for months, but could the end be in sight? Perhaps so if Danny Morgan’s (Porter Fasullo) Christmas plans are any indication.

During the week of December 23-27, General Hospital spoilers say Danny will pay a visit to Santa Claus. He’ll have a special holiday wish to share – and we can all probably guess what it is. There’s a good chance Danny will ask for his mom to come home. Danny may tell Santa that all he wants for Christmas is to have his family back together.

It should break Jason’s heart if he overhears. He’ll know this isn’t something “Santa” can control, but even Jason may be hoping for some Christmas magic deep down. Jason seems a little lost without Sam by his side. He’s staying strong for Danny and Scout Morgan (Ella Ramacieri), but he’s suffering deep down. Jason feels helpless and that’s just not a position he’s used to being in.

However, GH hopefully wouldn’t let Danny wish for something that isn’t going to come true. That would be pretty cruel! It could be a hint that Sam will indeed be home for the holidays – if not by Christmas, then at least by early 2019. That brings us to a few wishes of our own. Here are three things “JaSam” fans want to see in the new year.

This one we’ve already mentioned, but it’s worth repeating! Sam needs to be out of Pentonville and back with the fam. She never deserved to be behind bars for killing horrible Shiloh Archer (Coby Ryan McLaughlin), so let’s hope General Hospital makes this right soon.

2) Wedding for Jason and Sam

After everything Jason and Sam have been through, they’re long overdue for a wedding! Jason needs to pop the question and get the ball rolling on some “JaSam” nuptials. It’d be nice to have something to look forward to instead of constant doom and gloom for this couple.

Of course, not every “JaSam” fan will agree that Jason and Sam should have another kid, but many viewers have expressed interest in it. Jason will undoubtedly raise Scout like his own daughter now that Drew Cain (Billy Miller) is gone. Even so, it might be fun for Jason and Sam to welcome another baby together. It’d be pretty darn adorable – and he or she could grow up right alongside Donna Corinthos.

What would you like to see for “JaSam” in the new year? Are you hoping for Sam’s freedom, a wedding and a possible bundle of joy? We’ll give you updates as other GH news comes in. Stay tuned to the ABC soap and don’t forget to check CDL often for the latest General Hospital spoilers, updates and news.