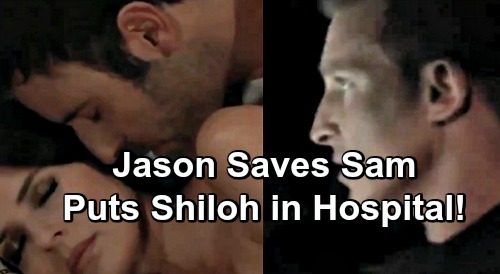 General Hospital (GH) spoilers tease that Molly Lansing-Davis (Haley Pullos) will remain determined to take down Shiloh Archer (Coby Ryan McLaughlin). She’s furious over the grip Shiloh once had on Kristina Corinthos-Davis (Lexi Ainsworth). Molly clearly doesn’t like the hold Shiloh has on Sam McCall (Kelly Monaco) either, so she’s taken matters into her own hands with a desperate plan.

Of course, Molly doesn’t know Sam’s working just as hard on a takedown mission. Will Molly’s article ruin Sam’s plot and put her in grave danger? Peter August (Wes Ramsey) is quite interested in her new cult story, which he mentioned to Shiloh. Molly is relieved that Kristina’s out of that horrible place, but she won’t rest until Sam’s out, too.

However, Molly’s actions could also lead to the exposure of Sam’s scheme and more drama for her family. The harder Molly pushes, the harder Shiloh may have to push back. If Shiloh goes too far, Sam may have no choice but to blow things up for herself. Then again, there could be something in the article that tips Shiloh off to trouble.

We know Shiloh will land at GH with some injuries soon. Will Jason Morgan’s (Steve Burton) attack put him there? A leaked photo showed a bloody, roughed-up Shiloh with his arm in a sling, but a new promo shows a gun being fired – which could tie in here. Jason will head off to stop Sam’s initiation on the new GH episodes, May 23 and May 24, so he’ll do whatever it takes to stop the sex session. He has no problem resorting to violence if need be.

During the week of May 27-31, General Hospital spoilers say Shiloh will be happy to have Sam by his side. Perhaps she’ll be by Shiloh’s hospital bed when he awakens. Sam may continue to play this like Jason is an obsessed ex who won’t leave her alone. That could keep her scheme going if the evidence against Shiloh doesn’t pan out right now.

It could also open the door for the plot to be botched another way – like through the published article. Sam will be at Shiloh’s mercy if the wheels start turning and he figures out the truth.

She’s been playing Shiloh the whole time, so General Hospital spoilers say this creep should explode when he realizes he won’t get what he wants. Shiloh obviously isn’t a man who likes to get duped! He prefers to do that himself through his vulnerable followers.

It sounds like some shocking moments are coming up in Port Charles. We’ll give you updates as other GH news emerges. Stay tuned to the ABC soap and don’t forget to check CDL often for the latest General Hospital spoilers, updates and news.