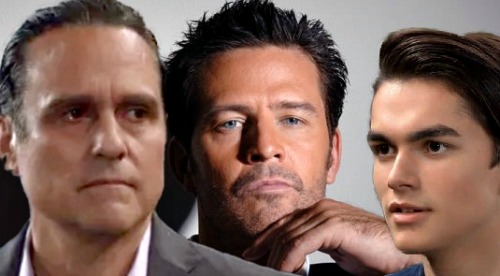 General Hospital (GH) spoilers tease that Jason Morgan’s (Steve Burton) instincts are usually spot-on, and they could be with Dev (Aston Arbab) as well. Could Dev be another Alcazar child or minion out for revenge for his father’s alleged ‘death?’ Of course savvy GH fans know that all evidence is that Alcazar is alive… is he running a hidden agenda using Dev?

Dev Could Be Alcazar’s Son

General Hospital hard core fans know that Lorenzo Alcazar (Ted King) supposedly died years ago and was thrown off a bridge outside of Port Charles by Jason Morgan (Steve Burton). However, Tomas Delgato (Ted King) arrived in Llanview PA. and was thought to be Alcazar.

Tomas was supposedly a CIA agent who was engaged to Blair Cramer (Kassie DePaiva) and left town on a secret mission. However, Tomas had a son named Sebastian “Baz” Moreau. Could Dev be Sebastian and is he out to avenge what he considers an unprovoked attack on his father?

Could Dev Have Infiltrated The Corinthos Organization To Take Down Sonny and Jason?

Dante was an undercover cop who was there to take Sonny down. General Hospital spoilers suggest Dev could be a plant from the Alcazar camp to take down Sonny and Jason to avenge his father. It would not be the first time Sonny was fooled by someone he wanted to mentor. If Dev is a plant, will Jason be able to get proof before it is too late?

Could Alcazar Have Been Behind Raj’s Attack

GH buzz is that Raj (Noshir Dalal) had someone backing his attempt to take out Sonny Corinthos. Raj had to have help both with getting out of Port Charles and with setting up his compound in Turkey. Could Alcazar have been backing Raj and working with Paul Hornsby (Richard Burgi) to run guns through Port Charles?

Could the arms deal have been a cover for Alcazar to try to take out Sonny? Sonny has many enemies, but Alcazar is one of the most vengeful. Will Jason be able to stop Dev, and possibly Alcazar, before Sonny and his family can be hurt further?

Dev is simply too good to be true – do you think there’s something up with this guy that has triggered Jason’s instincts? Come back to CDL for all your General Hospital spoilers, updates and news!