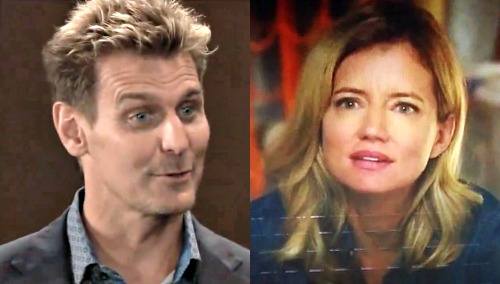 General Hospital (GH) spoilers tease that Jasper “Jax” Jacks (Ingo Rademacher) will be staying in Port Charles indefinitely. He’ll support Josslyn Jacks (Eden McCoy) as she struggles to mend her broken heart, but there’s much more in store for Jax. There’s a good chance Jax will take over Aurora Media, which could bring some intriguing scenarios and possibly a new love story.

Aurora owns Crimson, so Jax could land in Nina Reeves’ (Michelle Stafford) orbit. Of course, we should also point out that General Hospital recast the role of Nina. Cynthia Watros will start work in early June, so look for her version of Nina to heat things up this summer.

Nina’s relationship with Valentin Cassadine (James Patrick Stuart) will undoubtedly implode thanks to the fake daughter chaos. That could leave Nina open to new pairing possibilities. So…we’ve got Jax who needs a love interest. We’ll also have a new version of Nina that GH can play around with. There’s no reason why General Hospital shouldn’t put Watros’ Nina with Jax and see what happens.

They could become quite the Port Charles power couple down the road. Jax might be just what Nina needs to cope with the heartbreak of Valentin’s deception. If Jax can give Nina stability and honesty, she can heal and get her life back on track.

Perhaps Jax could help Nina track down her real daughter as well. We can probably assume that’s Willow Tait (Katelyn MacMullen) based on all the clues they keep giving us. Naturally, Carly Corinthos (Laura Wright) could find herself poking her nose where it doesn’t belong. She may end up butting in Jax’s business and questioning his romantic choices. GH fans know meddling is Carly’s specialty!

Regardless, General Hospital spoilers say Jax as some hot plots in his future. It’s nice that GH brought Jax home to continue his story and take him in some exciting directions. Are you looking forward to what’s next for Jax? Do you think a Jax and Nina pairing is a good idea?

General Hospital viewers won’t want to miss all the drama ahead. We’ll give you updates as other GH news comes in. Stay tuned to the ABC soap and don’t forget to check CDL often for the latest General Hospital spoilers, updates and news.