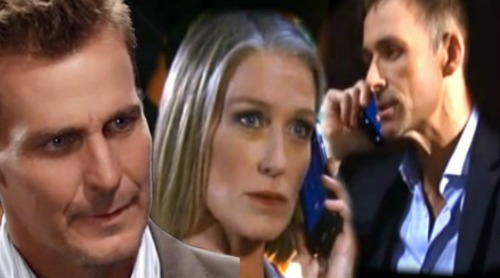 General Hospital (GH) spoilers reveal that Jasper “Jax” Jacks (Ingo Rademacher) keeps a file on all his business associates, but there’s one that just kicked off a new GH mystery. What kind of business associate would a drug dealer be and why is she working with Jax? That’s the question on everyone’s mind since Curtis Ashford (Donnell Turner) uncovered a file on Cassandra Pierce (Jessica Tuck).

Valentin Cassadine (James Patrick Stuart) worked with Cassandra, which could be a simple answer for the file. While investigating Valentin, Jax could’ve stumbled across Cassandra’s name. Perhaps he ran a background check on Cassandra to see what she was all about.

Jax always likes to know who he’s up against. If he wants to come between Nina Reeves (Cynthia Watros) and Valentin, he needs to know everything he can about his opposition. Researching Valentin’s enemies and allies makes sense. Of course, there could also be a less innocent explanation for this file.

Jax’s brother, Jerry Jacks (Sebastian Roche), was tangled in the Russian drug cartel years ago. Cassandra is a known drug dealer and jewelry thief, so there could be a link here. It’s possible Cassandra was tied to Jerry back then. Jax isn’t known for being into anything illegal like drugs, but could there be another connection we don’t know about between the two?

Jax is a corporate raider; he isn’t typically associated with criminals other than his brother. However, not a lot is known about Cassandra’s past. Jax could’ve raided a cover company that Cassandra laundered drug money through. Cassandra and Jax might’ve both been trying to buy the same company at one point. Then again, there could be some other professional link that’s yet to be revealed.

General Hospital fans know Jax has always been underhanded. Could Jax have been the one who needed Cassandra revived? Was he behind Hamilton Finn’s (Michael Easton) kidnapping to make that happen? You can never rule anything out when there’s a GH mystery going on and Jax has Cassandra’s file!

Jax might’ve needed Cassandra’s help with some vengeful plot. Whether that means revenge on Valentin or even Sonny Corinthos (Maurice Benard), it’s an option to consider. We should also consider the possibilty that Jax knows Nina was behind Cassandra’s health problems. He’s obviously up to something and might have known exactly what he was doing when he bought Crimson.