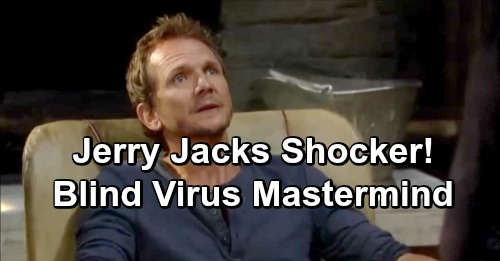 General Hospital spoilers tease that the previously eradicated Eastern European virus that first struck Anna Devane (Finola Hughes) and now seems to have struck Ryan Chamberlain (Jon Lindstrom) may be a type of germ warfare attack against General Hospital itself.

Finn (Michael Easton) and Anna previously thought it was an attack only against her, and traced Patient Zero (the first person known of to have the virus) to a Dr. Henry Cabot. This mysterious German physician and researcher who worked for the DVX with Cesar Faison (Anders Hove) and the organization itself took an interest in biochemical warfare and mind control.

But Ryan seems to be out of place in a DVX scenario –  he and Anna have no common denominators other than the hospital. Thanks to the virus, Lulu Falconeri’s life was spared, and if the treatment that worked on Anna doesn’t work on Ryan, it couldn’t happen to a nicer guy, so there is that.

If the virus attack had been only against Anna, and Ryan hadn’t been thrown in the mix, then that would make sense. Liesl hates Anna, was involved with Faison, and so obviously must have been involved with the DVX also during those years.

Other General Hospital spoilers have teased that perhaps Cassandra Pierce (Jessica Tuck) is involved – and while GH spoilers say the question of Cassandra and who has her will hang over Port Charles in 2019, she herself has been missing for months.

Dr. Cabot could be hiding in plain sight but why would he have an agenda against the hospital, or even Anna, for that matter, since they didn’t know each other in the past?

There is one person who might fit the bill, and his agendas usually have no reason or rhyme other than just plain evil or possibly blackmail, and this guy was involved with Faison, the DVX, and the Cassadines as well….plus he’s done similar things before. That would be Jerry Jacks (Sebastian Roche)!

In August 2012, Jerry held the city of Port Charles hostage due to a pathogen he had put in the water supply that caused an incurable disease, and would have to pay a ransom to Jerry to get the cure. GH doctors ultimately were able to synthesize an antidote and Jerry supposedly died in a gas explosion on a boat.

The next time, and the last time, GH viewers saw Jerry was in 2015, when he had been involved with Helena Cassadine (Constance Towers) and had held Dr. Robin Scorpio-Drake (Kimberly McCullough) hostage to try and develop a cure for Helena’s terminal illness.

At that time, Robert Scorpio (Tristan Rogers) carted him off to Steinmauer Prison, but Robert’s just about to return so he may have some news about Jerry. So will Jerry Jacks turn out to be the mastermind behind this viral attack? February sweeps are just ahead and exciting drama with it; stay tuned to GH and keep checking General Hospital spoilers frequently to see what happens next!