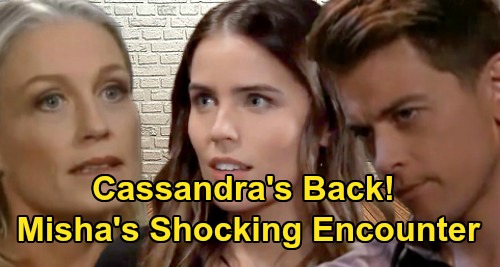 General Hospital (GH) spoilers tease that a big return is coming up, and it’s been hinted at a lot lately. Since there have been so many Cassandra Pierce (Jessica Tuck) mentions, it was just a matter of time until she popped up again. Cassandra will indeed make her GH comeback starting Thursday, August 1. It’ll be interesting to see what Cassandra has in store during this stint.

Although Cassandra’s return itself may not be surprising, how she’ll reenter the picture will bring some real shockers! It turns out two Port Charles residents will bump into Cassandra during their island getaway. Of course, we’re talking about Michael Corinthos (Chad Duell) and Sasha Gilmore (Sofia Mattsson).

Sasha and Michael recently delayed their trip, which will put them in the right place at the right time for this accidental meeting. General Hospital spoilers say Michael and Sasha’s plans will go awry as a result. What’s up with this chance encounter? Is it a clue that Sasha’s connected to Cassandra or will she just link this story to another one with Valentin Cassadine (James Patrick Stuart)?

Regardless, it’s a fun strategy to reintroduce Cassandra. Perhaps Sasha and Michael will even get a glimpse of that mystery man GH talked about. Could Michael see someone who looks like Nikolas Cassadine (last played by Nick Stabile) or another familiar face from the past? Remember that the guy who scooped Cassandra up had a ring featuring the Cassadine family crest.

Between that and all the Nik hints GH has been offering, a Nikolas comeback definitely seems to be in the works. For now, Cassandra will focus on shaking things up herself. It probably won’t be long until Cassandra makes a few waves for Valentin, Nina Reeves (Cynthia Watros) and Hamilton Finn (Michael Easton). She could be cooking up something big for all parties involved.

General Hospital spoilers say Cassandra’s return will unravel a few mysteries and bring some bombshells. Her comeback should be exciting for viewers and deeply troubling for her targets. GH fans won’t want to miss the twists and turns ahead. We’ll give you updates as other news comes in. Stick with the ABC soap and don’t forget to check CDL often for the latest General Hospital spoilers, updates and news.