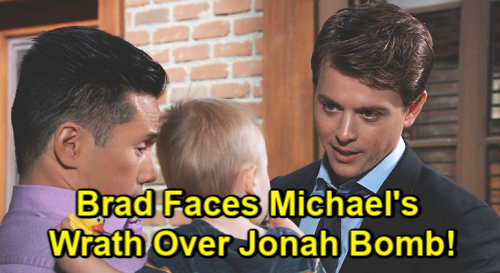 General Hospital (GH) spoilers tease that Shiloh Archer (Coby Ryan McLaughlin) will force the first phase of the baby swap reveal. There are several layers to this storyline, so it’s almost time to peel back the first one. Brad Cooper (Parry Shen) already shared his slightly altered version of the switch story with Julian Jerome (William deVry), but he’ll have to spread that story soon enough.

During the week of July 8-12, several General Hospital spoilers point to a partial reveal. Shiloh plans to have a DNA test done on a cloth belonging to “Wiley Cooper-Jones.” The results aren’t going to be what Shiloh expects. They’re not going to be what Willow expects either! She believes she’s been working hard to keep her baby away from his evil father, but neither one of them’s related to this kid.

However, this is a crucial step forward in the story. GH doesn’t want to let everything explode at once, so they need to let the first revelation be that Wiley is dead. The final blow can be that Wiley was swapped for Jonah Corinthos that fateful night.

Will Nelle Benson Escape Pentonville And Kidnap Her Son?

General Hospital spoilers say there’ll be more drama that builds to that shocker. Will “Wiley” face a health issue that forces Brad to come clean? Could Michael Corinthos (Chad Duell) or Nelle Benson (Chloe Lanier) stand the best chance of helping the kid? That’d be one way to take this storyline.

Of course, Nelle could simply stir the pot with clues or even try to kidnap Jonah after escaping. Regardless, we may be poised for a November sweeps Jonah reveal. It makes the most sense considering the “Wiley is dead” chaos will likely erupt next week. GH can let that revelation lead up to the bigger one this fall.

Once the whole truth comes out, Brad’s definitely going to pay the price. Nelle’s a manipulative nut job, but Brad was supposed to be settling down and putting his scheming ways behind him. Instead, he let Nelle rope him into a plot that’ll end in disaster. You can bet Brad will face Michael’s wrath after the Jonah bomb drops.

Brad Cooper Robbed Michael Corinthos Of Time With His Child

Michael will inevitably think about he grieved for Jonah while Brad sat back and enjoyed his new child. It’s true that Brad’s been a nervous wreck, but that doesn’t change the fact that he’s been seeing every milestone and moment.

Brad had no right to rob Michael of all this time with his son. He’s had plenty of opportunities to turn this around, but he’s in too deep and will have to suffer down the road.

Brad has set Lucas Jones (Ryan Carnes) up for devastation as well, so this will be heartbreaking all around. Nevertheless, most fans are looking forward to Michael finally getting his hands on Jonah. Many General Hospital viewers are anxious to see Michael unleash his fury, too. It’ll be a great payoff after the twists and turns of this lengthy story.

Are you ready to see Michael raise Jonah and show off his fierce side? We’ll give you updates as other GH news comes in. Stay tuned to the ABC soap and don’t forget to check CDL often for the latest General Hospital spoilers, updates and news.