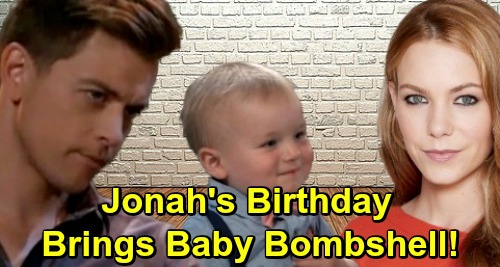 General Hospital (GH) spoilers tease that some shockers are looming in the baby swap storyline. Things will start heating up as we get closer to the big reveal. For starters, Willow Tait (Katelyn MacMullen) will have an encounter with Harmony Miller (Inga Cadranel). It’ll lead to a revelation that’ll undoubtedly be important later.

Harmony will deliver her statement against Shiloh Archer (Coby Ryan McLaughlin) at the PCPD. She’ll be placed in the cell across from Willow at some point, so that’ll give them a chance to talk. Harmony may apologize for her role in Willow’s suffering. It can’t undo the terrible damage, but at least Harmony’s making an effort.

General Hospital spoilers say Willow will hear about Harmony’s time in prison, which is where the baby-related tidbit comes in. Harmony will mention that Nelle Benson (Chloe Lanier) is her roommate. If Nelle has shared some of her story with Harmony, there’s a chance Harmony will note that Michael Corinthos (Chad Duell) is her ex.

Michael has alluded to his problematic former flame in conversations with Willow before. Harmony’s admission could serve as a small puzzle piece along the way. GH wouldn’t let Willow know about Harmony and Nelle’s link if it wasn’t going to be important.

Of course, Nelle herself will continue to create issues. During the week of July 22-26, a locked-up Nelle will harass Michael. It sounds like she’ll send another cryptic message, and there’s a good reason why. General Hospital spoilers say Michael will have a rough time on what would’ve been Jonah Corinthos’ first birthday. Nelle will take this opportunity to exploit Michael’s latest wave of grief.

Will Nelle’s next message contain another crucial clue? She once wrote Michael a letter suggesting he should find comfort in “Wiley Cooper-Jones.” Nelle may not be able to resist dropping another “Wiley” hint. If Willow relays something from Harmony and it doesn’t quite add up, this puzzle could finally start coming together.

When you combine that with a DNA test that proves Shiloh isn’t the “baby daddy,” Michael’s going to have questions – and so will Willow! Is GH putting clues in their hands so they can solve the mystery together? Will Michael and Willow team up to learn the truth about the fake Wiley?