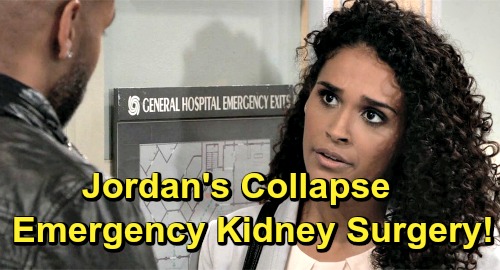 General Hospital (GH) spoilers reveal that Jordan Ashford (Briana Nicole Henry) is pushing herself too hard. She really should’ve taken some time to recover after her accident, but she’s throwing herself back into work instead. Jordan’s putting far too much stress on the only kidney she has left, which is damaged and in need of a replacement. The trouble is Jordan isn’t very far up on the transplant list.

To make matters worse, Jordan is sabotaging herself. She was visibly pained as she struggled to catch her breath, but she’s choosing to grin and bear it when she’s around other people. Jordan will undoubtedly keep ignoring the problem, which is the last thing she needs to be doing. Her situation isn’t considered as severe as other patients on the list, and that won’t change if she stays silent.

General Hospital spoilers say Curtis Ashford (Donnell Turner) will continue worry about Jordan and her medical crisis. On April 4, Curtis will take Stella Henry (Vernee Watson) out to dinner. He’ll want to catch up with his auntie and undoubtedly share his concerns about Jordan.

Curtis may fear that Jordan won’t slow down unless her body physically makes her. This could turn into a dire dilemma if Jordan lets it go on. That same day, Jordan will have some big news. There are a few options to consider here.

It’s possible Jordan will get updates on a donor, but that doesn’t quite fit. We already pointed out she’s pretty far down the transplant list and there won’t be much drama if Jordan gets it before it’s absolutely necessary. Perhaps the news will be work-related instead. She might get a clue about Ryan Chamberlain’s (Jon Lindstrom) survival or something along those lines.

Anything that keeps Jordan working more will be bad for her health. She expects to be able to do what she did before and that’s just not realistic. Jordan needs a kidney transplant if she wants to get back to 100 percent. Is all of this building to a shocking medical scare? Will Jordan collapse on the job and have to be rushed to GH?

General Hospital spoilers say emergency surgery could be in Jordan’s future, but they have to find a donor first. Curtis will be a mess once some alarming hurdles hit, so stay tuned. We’ll keep you posted as other GH details emerge. Stick with the ABC soap and don’t forget to check CDL often for the latest General Hospital spoilers, updates and news.