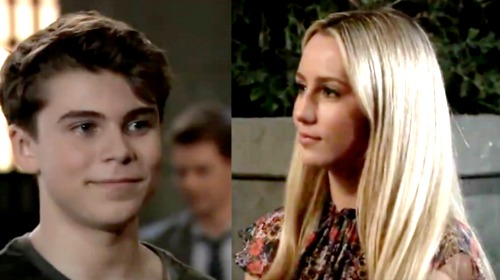 General Hospital (GH) spoilers tease that Josslyn Jacks’ (Eden McCoy) broken heart will slowly heal. She was deeply distraught before Oscar Nero Quartermaine’s (Garren Stitt) memorial, so she opened up to Jasper “Jax” Jacks (Ingo Rademacher). Since Josslyn’s grief was so overwhelming, she couldn’t help but wonder if she’d feel this way forever.

However, Jax reminded Joss that she went through a rough time after Morgan Corinthos’ (Bryan Craig) death, too. Josslyn still misses her brother, but she found a way to cope and move on. It may not feel like it now, but Joss will ultimately do the same with this loss. She’s finally wrapping her head around it and getting some closure, so that’s an important part of the healing process.

After Oscar’s memorial, Joss decided to hang out with Cameron Webber (William Lipton) and Trina Robinson (Sydney Mikayla). The teens opted to grab some more food and basically keep the celebration going, so that seemed like a significant “life goes on” moment. General Hospital spoilers Joss will keep living her life as best she can. She’ll face some setbacks along the way, but Cam will be there to help.

Josslyn’s family will continue to support her, but things are different with Cameron. He cared about Oscar a great deal, so there’s a hole in his heart as well. Of course, there’s always been a buried spark with these two. It really came to the surface when Cam pretended to be Joss’ fake boyfriend. Oscar’s cancer diagnosis pushed Josslyn back in his direction, which turned out to be a good thing.

It would’ve been cruel for GH to make Oscar go through his final months without Joss. It’s great that they keep the teens’ love story intact, especially since it gives Josslyn more to do now. She truly loved Oscar; it wasn’t just about obligation. That means Josslyn could face some tough hurdles when it’s time to move on.

We mentioned that spark between Cameron and Josslyn. General Hospital obviously won’t be pairing them up next week or anything, but there’ll come a time when this pairing will happen. You can count on that. Oscar was Josslyn’s first love, but he won’t her last. We all know Oscar would want Joss to find love again, and he’d surely be fine with Cam being her new beau.

General Hospital spoilers suggest that step could bring major challenges. It’s easy to imagine Joss falling for Cameron before pulling away. Even after waiting an appropriate amount of time, Josslyn may battle guilt about truly letting go. She won’t want to feel like she’s forgetting or betrayaing Oscar, but Cameron will undoubtedly be patient. Perhaps Cam can help Joss see that the future is still bright.