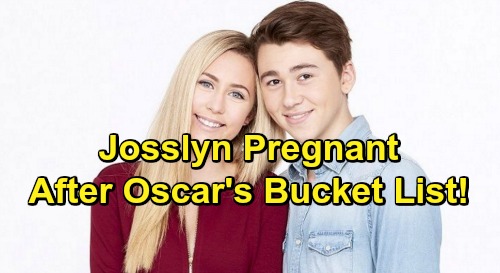 General Hospital (GH) spoilers tease that Oscar Nero (Garren Stitt) will want to make the most of his remaining days on earth. Dr. Kim Nero (Tamara Braun) hates that she dangled hope in front of her son and forced him to spend weeks at GH. Those were weeks he could’ve spent making memories with his family and friends.

However, they can’t go back and at least now Oscar knows where he stands. He admitted to Josslyn Jacks (Eden McCoy) that it’s almost a relief. Oscar understands there’s no winning this battle, so he’s ready to lose with dignity. He wants to live what’s left of his life to the fullest and he’ll do that with a little help.

General Hospital spoilers say Josslyn will support Oscar throughout all this. Cameron Webber (William Lipton) will eventually lead the lovebirds into some fun mischief, so that’ll help fulfill Oscar, too. Perhaps Oscar will get back to that bucket list he once talked about with Josslyn – only this time he’ll know he truly needs to work fast.

Of course, we have to wonder if sex might be on that bucket list. Oscar would never want Josslyn to sleep with him just because he’s dying, but that wouldn’t really be the reason. After all, Joss already wanted to have sex. It was Oscar who suggested they should hold off.

Now that Oscar’s clock is winding down, will he be more open to the idea? Maybe Oscar won’t particularly want to die a virgin. Josslyn may also want Oscar to be her first time before he fades away. They might make love before Oscar ultimately dies and leaves Josslyn brokenhearted. Could he also leave her with a bun in the oven, too?

It’s easy to imagine Josslyn and Oscar getting carried away in the heat of the moment. Their parents have warned them about using condoms, but teens are rarely responsible on soaps. Besides, condoms aren’t foolproof. One with holes in it could obviously lead to trouble.

Whatever the case, it would certainly be soapy for Josslyn to end up pregnant with Oscar’s child. She could find out shortly after his death and ponder her next move. Naturally, Joss would want to keep the kid. She’d like having something to forever link her to Oscar, even after he’s gone.

This would be the perfect opportunity for Cameron to step up, too. He could decide he wants to be there for Josslyn and the baby. Cam could vow to be a father figure in this child’s life and help Josslyn every step of the way.

Do you think General Hospital will do a teen pregnancy story? Will Josslyn wind up expecting Oscar’s bundle of joy after he dies? We’ll give you updates as other GH news comes in. Stay tuned to the ABC soap and don’t forget to check CDL often for the latest General Hospital spoilers, updates and news.