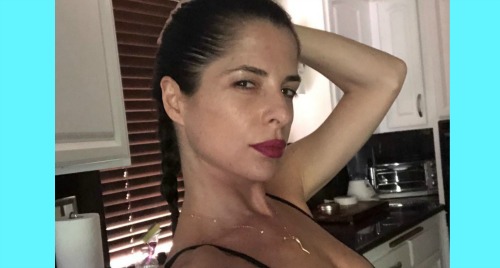 General Hospital (GH) spoilers reveal that one ABC soap star had quite a mishap – and it was all caught on camera. GH fans know Kelly Monaco as the fierce and determined Sam McCall (Kelly Monaco) in Port Charles. Jason Morgan (Steve Burton) steps up to save Sam at times, but never forget that she’s stepped up to save him, too! Sam is never afraid to leap into action.

Monaco had to pull off a little rescue of her own when she was cleaning her pool recently. She posted a clip of the whole ordeal, which came from security cam footage. Monaco also narrates what she’s doing in this funny video. General Hospital fans can see Monaco panic as she drops her phone right into the pool. She instantly dives in and swims down to get her beloved device before rising back to the surface.

Monaco said, “Going into the weekend like…hilarious! (Video captured on my security cameras) and it works! Way to go iPhone.” Phones and water aren’t a good combo, so it’s great that Monaco’s efforts paid off. Her rescue mission was a success, and she’ll undoubtedly be more careful the next time she’s poolside with her cell!

On the bright side, Monaco got a highly entertaining video thanks to her blunder. Jason Thompson (ex-Patrick Drake on GH, current Billy Abbott on The Young and the Restless) even got a kick out of it. In the comments of Monaco’s post, Thompson chimed in with “Haha haha!!!!” We all have those moments of calamity in our lives, especially when it comes to easy-to-drop phones.

As for what’s next in Port Charles, General Hospital spoilers say Sam will get caught up in a couple different stories. Naturally, Shiloh Archer (Coby Ryan McLaughlin) will remain an issue. His lingering threat will leave Sam and Jason Morgan (Steve Burton) concerned after more stunts are pulled.

Of course, Alexis Davis (Nancy Lee Grahn) also has a scary stalker now. Kenda Lennon (Michelle Argyris) will make some waves, which could pull Sam and her sisters into the chaos. General Hospital spoilers say the excitement’s about to rev up, so stay tuned. We’ll give you updates as other GH news comes in. Stick with the ABC soap and don’t forget to check CDL often for the latest General Hospital spoilers, updates and news.

Going into the weekend like…hilarious! (Video captured on my security cameras) and it works! Way to go iPhone