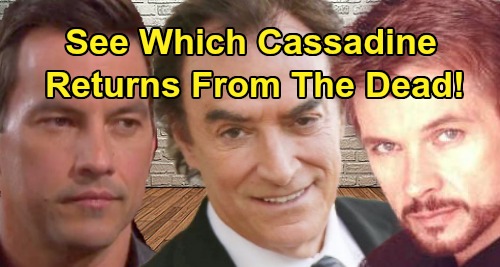 General Hospital (GH) spoilers tease that the ABC soap may be moving forward with a major mystery. GH fans will recall that the show spent some time setting up a Cassadine story for Alexis Davis (Nancy Lee Grahn). Unfortunately, that storyline never really went anywhere. It seems the show got busy with other hot plots and had to put that one on hold.

Now that Alexis has found a new therapist to confide in, we’re finally getting somewhere. General Hospital is letting this story masquerade as a simple case of opening up and finding love again. It’s clear that Dr. Neil Byrne (Joe Flanigan) is meant to be Alexis’ new leading man. However, there’s likely a much deeper reason they’re taking the therapy route.

After all, General Hospital could’ve chosen just about any profession for Neil. Alexis could’ve caught the eye of a handsome doctor, businessman or rival lawyer. Instead, they’ve made Neil someone Alexis can learn to trust and share her most inner thoughts with. As Alexis peels back the layers of her history, we should inch closer to answers about that Cassadine mystery we talked about.

Alexis got off to a nice start when she brought up her father, Mikkos Cassadine (John Colicos), as well as her messed-up childhood. Neil suggested that’s what drove Alexis to seek out men who are powerful and dangerous. He’ll certainly want to unpack more Cassadine family drama during their upcoming sessions.

As Alexis reflects, it could set up shockers that tie in with another hot storyline. We can’t forget that someone with a Cassadine ring kidnapped Cassandra Pierce (Jessica Tuck) – although she probably joined forces willingly once everything was explained to her. GH didn’t reveal the wearer of this Cassadine ring, but there are three main contenders to consider.

The first is Nikolas Cassadine. Tyler Christopher is no longer at Days of Our Lives, so it’s possible he’ll reprise his popular role. Then again, General Hospital spoilers say a recast could step in. Stefan Cassadine (Stephen Nichols) is another good option along with Victor Cassadine (Thaao Penghlis). Any of these GH and DOOL alums would be welcome back in Port Charles.

Alexis first retrieved her mother’s watch from Valentine Cassadine (James Patrick Stuart), who would likely be the target of the plot that’s brewing. His connection to Cassandra makes that highly likely. Nikolas makes the most sense as the one who’d want revenge, but all Cassadines tend to be troublemakers. No matter which one returns from the dead, Valentine may want to watch his back.

Now that Alexis’ side of this story is heating up, it may not be long until Valentine gets caught in the chaos. Perhaps extreme danger could help Nina Reeves (Michelle Stafford) forgive Valentin for the daughter deception! We’ll give you updates as other GH news comes in. Stay tuned to the ABC soap and be sure to check CDL often for the latest General Hospital spoilers, updates and news.