General Hospital Spoilers: Kiki’s Message to Mom from the Beyond – Will Hayley Erin Return for Ava’s Séance Shocker? 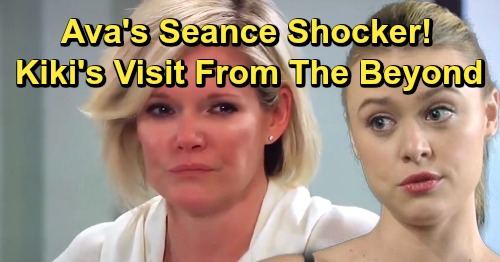 General Hospital (GH) spoilers reveal that Ava Jerome (Maura Wright) just got a shocking idea. It’s clear that Ava’s still struggling over the loss of Kiki Jerome (Hayley Erin). That reservation on her phone was a grim reminder of the things she’ll never get to experience with Kiki now. Ava thought she could build a better relationship with her daughter eventually, but she was robbed of that chance.

That brings us to Ava’s shocking idea. She listened in on Josslyn Jacks’ (Eden McCoy) chat with Maxie Jones (Kirsten Storms) about the séance. Joss admitted she felt like she made contact and got some closure, which is exactly what Ava’s desperate for. There’s a good chance Ava will start planning a séance of her own soon enough.

Veronica Cartwright will portray a mysterious character in a five-episode arc this summer. We know Cartwright will share scenes with West, and she played a fortune teller in Netflix’s Chilling Adventures of Sabrina recently. It makes sense that GH hired Cartwright to give off a similar vibe here. She might be an eerie character who helps Ava reach out to the other side.

It’ll be interesting to see what the results of this séance are. Josslyn, Cameron Webber (William Lipton) and Trina Robinson (Sydney Mikayla) obviously weren’t following proper procedure with theirs. They ended up just telling stories about Oscar Nero Quartermaine (Garren Stitt) around the kitchen table.

Also, let’s be honest: they were jiggling the table with their laughter. Oscar most likely wasn’t rippling that water glass, even in this fictional world. Still, Josslyn found a bit more peace than she had before. That’s why it’ll be worth a shot for Ava. Could Ava have more success with a professional? We all know she’ll hire the best psychic she can find, so she might make actual contact and get a message in return.

Unless other contractual obligations get in the way, perhaps Hayley Erin could even make an appearance. She always loved her General Hospital family and valued her time there. It’d be fun to have Erin pop for a brief appearance.

After all, it was cruel to leave Ava on such bad terms with Kiki when she died. This an opportunity to patch things up between them – although we assume Kiki isn’t holding a grudge in the afterlife.

Maybe the psychic could pass messages between Ava and Kiki, who might only be visible to viewers. If Ava could beg for forgiveness and know that Kiki’s granted it, she’d finally be able to move on. Of course, the show could do all that without Erin’s appearance, but it’d mean more if we could actually see and hear Kiki say the words.