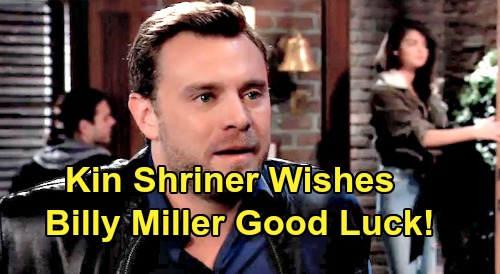 General Hospital (GH) spoilers reveal that one ABC soap star is wishing his costar well in his future endeavors. GH fans know Billy Miller has departed the role of Drew Cain. August 21 appears to have been Miller’s final airdate based on how the last scene of the show played out. An August 21 tweet from a fellow General Hospital actor backs up that idea.

Kin Shriner is a class act, so he wanted to give Miller some kind words after he hit the exit door. Shriner shared a special message on Twitter, which was liked and retweeted by many fans. He said, “Good Luck to Billy Miller had the great pleasure in sharing some scenes with him @GeneralHospital !!”

It’s nice that Shriner spoke up and acknowledged Miller, especially since this whole departure reeks of shadiness. What’s been going on behind the scenes? Something’s up here, but we may never know the full story.

Shriner’s tweet is noteworthy since so many of Miller’s costars remained silent on his exit. It makes you wonder if they’re afraid to pipe up or if there’s been some drama they’d rather not get in on. As for Shriner, he seems like the kind of guy who just does what he wants. There was certainly no harm in wishing Miller good luck, right? No matter what went down, well wishes should be welcome.

Kelly Monaco already spoke out on Miller’s departure, but she mostly just managed to raise more questions. On August 12, Monaco made a statement about Miller’s exit and promised to elaborate later. General Hospital viewers are still waiting on that follow-up tweet, but we’ll give you a reminder of the original.

“I feel like I have to address this situation,” Monaco said. “#BillyMiller ‘s untimely departure from #gh. Honestly, I can not come up with the words to describe how I feel about this decision… a decision that may not be what our audience thinks to be true. I’m heartbroken… more to come.”

Let’s hope Monaco keeps her promise so we can learn the details behind this mysterious and controversial exit. As for Drew, he’ll likely be presumed dead thanks to that Afghanistan flight. We’ll give you updates as other GH news comes in. Stay tuned to the ABC soap and don’t forget to check CDL often for the latest General Hospital spoilers, updates and news.

Good Luck to Billy Miller had the great pleasure in sharing some scenes with him @GeneralHospital !!