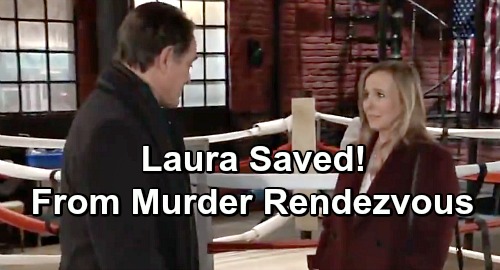 After Laura said one of her main goals were she to be elected mayor was mental health care reform, starting with Ferncliff her dear ‘husband’ gave her the look of death. Of course, Ryan couldn’t have that… after all HIS secrets are there, including his twin Kevin.

Ryan thought he’d taken care of that problem when he murdered Mary Pat Ingalls (Patricia Bethune) on Halloween, but it seems that more and more people are making themselves inconvenient and he feels compelled to get rid of them. It looks like he set up Laura to be one of them, arranging her to think Sonny wanted to meet her at the gym.

Question is… how did he manage that? If he’d have called Charlie’s Pub Julian probably would have answered and known that wasn’t Sonny’s voice – and if he sent a text, how did he get Sonny’s phone? Kevin is the last person Laura expects to see at the gym.

As she called for Sonny, finally Ryan emerged from a dark corner and said he needed to talk to her about something. He must be expecting to kill her there or he wouldn’t be stupid enough to pretend to be Sonny to get her over there!

However, one thing Ryan isn’t banking on is that Sonny just hired a gym new manager – and military hero Chet Driscoll (Chris Van Etten) just may prove himself a hero again by interrupting Ryan’s murderous meeting. After all, if the gym is open, then the manager should be somewhere onsite.