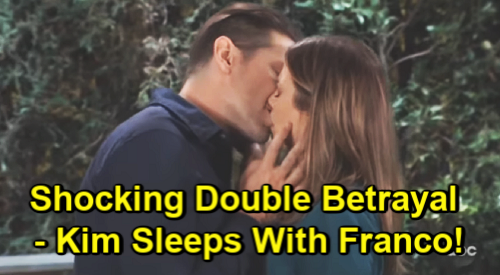 General Hospital (GH) spoilers tease that Kim Nero (Tamara Braun) will make a shocking decision during the week of September 16-20. GH fans know Kim’s been bonding with Franco Baldwin (Roger Howarth) lately. She can’t help but feel drawn to Franco since he has Drew Cain’s (Billy Miller) old memories and still feels the love they used to share.

Of course, it’s a complicated situation since Kim doesn’t want to betray her gal pal or her boyfriend! Elizabeth Baldwin (Rebecca Herbst) and Kim formed a friendship that’s suddenly in jeopardy thanks to all this memory-mapping drama. There have already been troubles in Kim’s relationship with Julian Jerome (William deVry) as well, but those are about to get worse.

General Hospital spoilers say Kim will find herself feeling a jumbled mess of emotions. She’ll eventually have a steamy sex session with Franco, but will something push her over the edge? Will there be some incident that makes Kim surrender to temptation?

Will Julian Jerome Do Something To Drive Kim Nero Away?

There’s a chance Julian will do something that drives Kim away. He’ll make a daring decision next week, which could involve plotting a hit on Liesl Obrecht’s (Kathleen Gati). If Kim gets a whiff of anything shady, she may think there are just too many problems here. Kim and Julian have tried to make this work, but there’s always some issue to get in their way.

Even if Kim doesn’t know the whole story, she could sense that Julian’s keeping secrets and find herself drawn to “Drew’s” honesty. Of course, there’s also the possibility Kim won’t need any help getting into bed with Franco!

Kim tried to rape Drew during the height of her Oscar Nero Quartermaine (Garren Stitt) grief and baby-making mission. She’s been in a fragile state ever since her son’s demise, so maybe she just won’t be strong enough to avoid temptation.

Regardless, Liz will be devastated when she finds out about this double betrayal. General Hospital spoilers say Liz won’t stop fighting for her man, but this will definitely be a tough pill to swallow.

She’ll likely blame Kim far more than Franco since he’d never do this under normal circumstances. The blame for this cheating scandal falls on Kim, who knows this isn’t Drew and will sleep with Franco anyway.