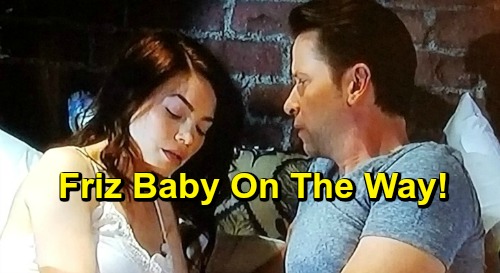 General Hospital (GH) spoilers tease that Elizabeth Webber (Rebecca Herbst) and Franco Baldwin (Roger Howarth) have a bright future ahead of them. This couple went through a rough patch thanks to Franco and Jordan Ashford’s (Briana Nicole Henry) secret plan. Liz had a hard time getting past Franco’s actions, but they’re finally back on track. They love each other, and that’s what really matters.

It’ll still take some work to fully repair the trust between them, but Liz and Franco can make it happen. They’ll soon move on and deal with some drama from the boys. General Hospital was all set to have a Facebook live chat with Rebecca Herbst and Roger Howarth, but the interview was delayed. Luckily, the show taped their comments and posted them later for all the “Friz” fans.

Herbst and Howarth covered some intriguing topics in this interview, including questions posed to them by curious GH watchers. Naturally, one of those questions involved the possibility of a family addition. Plenty of viewers out there would love to see a “Friz” bundle of joy, but what about the characters? How would Franco and Liz feel about having a baby together?

Howarth thought it’d be interesting to dig deeper into Franco’s fear of passing on his genes. “If they make that decision, I hope they explore all of those aspects of what it would be like to be a prospective parent,” Howarth said. He noted that Franco was mortified when he discussed the idea with Nina, so this might be a way to represent growth for Franco and show that his relationship with Liz is special.

You’d think Elizabeth might have some doubts since she’s got three rambunctious boys keeping her busy. However, Herbst feels like Liz would be on board. She’s even got the gender picked out, and her choice will undoubtedly thrill most of the “Frizzies.”

“Elizabeth has never had a planned pregnancy, so I think this would just be a different scenario for her,” Herbst said. “And she’s just so completely in love with Franco that I’m sure she would love to have a baby…a baby girl.”

Howarth even joked that they should have triplets! We’d say Elizabeth would draw the line there, but it would certainly be fun to watch Franco and Liz navigate the world of a newborn together. General Hospital spoilers say this couple’s in it for the long haul, so you never know! Maybe GH will let them add a baby to their brood someday.

Would you like to see Liz get pregnant with Franco’s baby? We’ll give you updates as other GH news comes in. Stay tuned to the ABC soap and don’t forget to check CDL often for the latest General Hospital spoilers, updates and news.