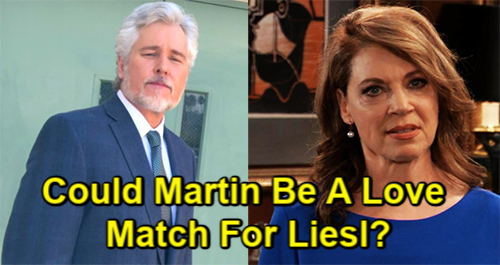 General Hospital (GH) spoilers tease that many fans adore Liesl Obrecht’s (Kathleen Gati) humor and spunk. It’s always nice to see her scheming and adding some comic relief along the way. However, some viewers are also hoping to see Liesl in a romance. She deserves love just like everyone else in Port Charles!

Liesl has quite the crush on Jasper “Jax” Jacks (Ingo Rademacher), but that’s just for fun. GH has no intention of putting them together. Jax and Nina Reeves (Cynthia Watros) seem poised to become an item, so Liesl needs to stop letting her heart flutter for a man she’ll never be with. Perhaps Liesl will eventually set her sights on someone else in town.

General Hospital recently debuted a new character named Martin Gray (Michael E. Knight). It didn’t take long for some fans to start shipping Martin and Liesl. There’s no sign of that happening onscreen yet, but we can certainly root for it. They seem like they’d make the ideal pair.

It’s been awesome to see GH updating Liesl’s style lately. They’ve given her wardrobe a bit of an upgrade, and her hair’s been looking fabulous, too! When you throw in Liesl’s intellect and unusual charm, why wouldn’t Martin want to date her? Martin seems to pride himself on being an intellectual, so they could be two peas in a pod.

As an attorney, Martin’s always working angles and doing whatever it takes to get what he wants. Doesn’t that sound a lot like what Liesl does in her daily life?

Martin Gray And Liesl Obrecht May Have Things In Common

Plus, Martin and Liesl are in the right age range for each other. They would probably have a great deal in common. It’d at least be worth a shot to let Martin and Liesl share some scenes. Maybe we’d see a real spark!

Could you get behind a romance for Liesl and Martin? Would you like to see Liesl find some happiness? General Hospital spoilers say Liesl will continue to stir up trouble in town, but let’s hope she finds love in the process!