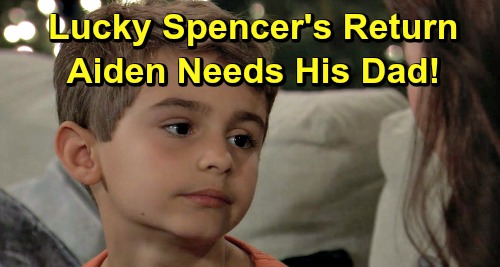 General Hospital (GH) spoilers report that one sweet little Port Charles child is going through a heck of a difficult period and really needs his dad! General Hospital’s Aiden Spencer (Jason David) is having a tough time right now and needs all the support he can get. Aiden is being bullied at school; his brothers are taking the flack too, and all three boys need people to help them deal with these changes. Should Lucky Spencer (formerly Jonathan Jackson) come back to help support his son?

Aiden seems to be suffering from identity issues. General Hospital’s Liz Baldwin (Rebecca Herbst) and her husband Franco Baldwin (Roger Howarth) are trying to help Aiden in every way they can. Liz has turned to Lucas Jones (Ryan Carnes) and Brad Cooper (Parry Shen) to help show Aiden that people accept him for who he is and to get him to open up about his feelings. Aiden has been pretty quiet except for his desire to bake a lot which Franco often helps him to do.

Bobbie Spencer Has Offered Advice Too

General Hospital’s Bobbie Spencer (Jackie Zeman) is Aiden’s great aunt and Lucas Jones’ adoptive mother. Bobbie has gone through this with her son Lucas and can give Liz sound advice on how to help her son. Bobbie is the perfect parent to help Liz because she knows what struggles, but she and Lucas went through before he came out.

Bobbie and help Liz avoid the mistakes she made with Lucas and offer advice on dealing with Aiden’s questions and concerns. But why is Bobbie the one helping Liz instead of Aiden’s father, Lucky?

When General Hospital’s Liz’s children were small, Lucky was a great father to them. Lucky treated all three children as if they were his children. After Jake’s kidnapping, Lucky changed and ended up leaving town to find himself. Lucky has been a missing father ever since. The last time we saw Lucky was when

he brought Jake home from Cassidine Island. Lucky just brought Jake back and left. Why is Lucky now such a deadbeat father? After eight years, Lucky should have found himself and returned to parent his children. Why would Lucky want these children to grow up without his influence?

Why not recast Lucky (unless Jackson wishes to return to GH) and let him return to help his child and be there for Jake and Cameron as well. Lucky dealt with Luke Spencer (Tony Geary) dropping in and out of his life all the time when he was younger, why would he want that for these kids? Why would Lucky be okay with the man who almost killed his sister being a father to these three kids?

Lucky is needed by the PCPD, by Laura Webber (Genie Frances), by Lulu Falconeri (Emme Rylan), but most of all by the children he swore to love. Lucky needs to get over his Liz issues and come home where he is needed. Come back to CDL for all of the best General Hospital spoilers, recaps and news!