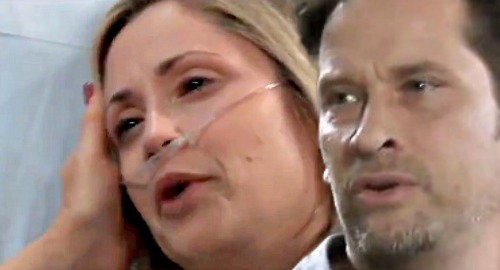 General Hospital (GH) spoilers tease that Lulu Falconeri (Emme Rylan) will identify Franco Baldwin (Roger Howarth) as her attacker as she continues to battle memory woes. She desperately wants to help Jordan Ashford (Briana Nicole Henry) catch the serial killer and put this guy behind bars where he belongs. Unfortunately, Lulu is too traumatized to wrap her head around what happened and focus on the face at the scene of the crime.

Laura Webber (Genie Francis) will keep pushing Lulu to concentrate on her recovery and celebrate the fact that she’s alive. There’s nothing more important than that! However, survival alone just won’t be good enough for Lulu. She’ll become fixated on pulling these memories back to the surface and pointing the finger at the guilty party. Lulu will just want to stop this murderer once and for all!

The good news is Lulu will get some help drawing her memories out. The bad news is it’ll come from the wrong person. General Hospital spoilers say “Dr. Kevin Collins” aka Ryan Chamberlain (Jon Lindstrom) will pitch in on this task. Of course, it’s risky to spend too much time with Lulu. That alone could trigger something for Lulu and remind her that Ryan is at fault.

Nevertheless, Ryan is awfully cocky. He’ll believe he can manage the situation as long as he’s the one in the driver’s seat. Whenever Lulu veers in a direction he doesn’t want her to go, Ryan will simply swerve the memory car. He’ll encourage her take a different route until she reaches the identification destination of his choosing.

In other words, Ryan’s going to plant ideas in Lulu’s head. He’ll make her believe that somebody else is the one and only person who could’ve stabbed that knife. Ryan will get Lulu to envision a scene so vivid that she fully believes it. She’ll ultimately blurt out the name he wants and most likely give the PCPD what they need to make an arrest.

It turns out the name Ryan’s counting on is Franco! He won’t be spared from Ryan’s mind games either. By the time Ryan is through with him, Franco may start to wonder if he really did and doesn’t remember.

This will turn into a big memory mess soon enough, but Franco will probably trust his instincts eventually. He should know there’s no way he could’ve done that to Kiki Jerome (Hayley Erin). GH spoilers say Ava Jerome (Maura West) will be shocked by the bogus killer revelation. Will she believe Franco’s guilty or suspect the PCPD’s got it all wrong?

Ava was quick to blame Dr. Griffin Munro (Matt Cohen) after he was arrested, but that was just after Kiki’s murder. Ava was highly emotional and eager to hold just about anyone responsible. Now Ava’s more interested in finding the true culprit, which obviously isn’t Franco. Will Ava sense that and keep digging for answers?