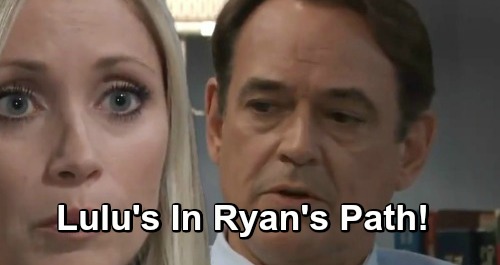 General Hospital (GH) spoilers tease that Ryan Chamberlain (Jon Lindstrom) will get back to his favorite activity – plotting a grisly murder. Ryan has already claimed the lives of three characters, but he’s not done yet. There’s another round of deadly drama brewing and it’s sure to bring chaos to Port Charles.

GH fans can expect Ryan to target Carly Corinthos (Laura Wright) next, but he may find her murder tricky to pull off. It’s doubtful that General Hospital is killing Carly off anyway, so Ryan’s delay probably won’t matter. However, there’s another crucial character who’s set to get on Ryan’s bad side. The investigative journalist in Lulu Falconeri (Emme Rylan) just won’t be able to help herself.

General Hospital spoilers say Lulu will land in danger, but just how much? Will she simply have a brush with death or will she meet a truly grim fate? Time will tell, but we’ve got some ominous info to mull over for now. It’s easy to see why some viewers might worry about Lulu getting out of this alive.

During the week of January 21-25, Ryan will do some gloating. Meanwhile, Laura Collins (Genie Francis) will console Charlotte Cassadine (Scarlett Fernandez) and Jordan Ashford (Briana Nicole Henry) will summon Peter August (Wes Ramsey) for some police business. All of that could point in the direction of Lulu being severely injured or killed.

Next, Sonny Corinthos (Maurice Benard) will battle anxiety while Carly deals with a broken heart. Sonny will pay his respects a little later, so it’s possible everything is connected to Ryan’s upcoming murder. There are certainly different conclusions you could draw, but the puzzle pieces would also fit with Lulu fighting for her life at GH – or her corpse being found.

Since Ryan knows the cops are onto his driver’s license trophies, he might skip taking one from his next victim. Ryan will already be switching it up a bit if he kills on an average weekday instead of a major holiday. He might even skip the flashy finish and just dump the body in a location that targets someone specific. Ryan has the chance to really throw off the PCPD if he wants to.

If Ryan changes his MO so that no one suspects it’s the same killer, he’ll lessen the chance that he’ll be caught. Ryan might take great pleasure in knowing he’s confused Jordan and her team once again. He’ll definitely have a reason to gloat if he takes out Lulu, the person who’s been covering his original crime spree.

Whether Ryan succeeds in killing Lulu or not, someone will likely be framed for the crime. Peter makes sense considering he’s connected to Lulu through their work at The Invader.

Plus, it’d be an excellent opportunity for Maxie West (Kirsten Storms) to step up and insist that Peter is innocent. She’d be emotional over Lulu’s ordeal, but she wouldn’t think Peter was capable of attacking her.

There hasn’t been any General Hospital buzz about Emme Rylan exiting the show, but maybe they’ve been able to keep it under wraps. Kiki Jerome’s (Hayley Erin) death was pretty much the worst-kept secret in soaps, so that could’ve given them a reason to tighten lips around the studio. Losses like this have a bigger impact if no one knows for sure they’re coming.

Regardless, Lulu hasn’t had much to do without Dante Falconeri (Dominic Zamprogna) around. To be honest, she didn’t have much to do when he was around either. GH doesn’t really use Rylan’s talent, so it’s not unreasonable to think they’d cut Lulu loose.

If they’re going to do that, they might as well go for a death since a serial killer’s in PC. Ryan needs more victims that matter, and Lulu would be one. Still, many General Hospital fans love Lulu and don’t want to see her perish at Ryan’s hands.

Let’s hope that after Lulu finds herself in Ryan’s violent path, she’ll somehow recover from her injuries. We’ll give you updates as other GH news comes in. Stay tuned to the ABC soap and don’t forget to check CDL often for the latest General Hospital spoilers, updates and news.