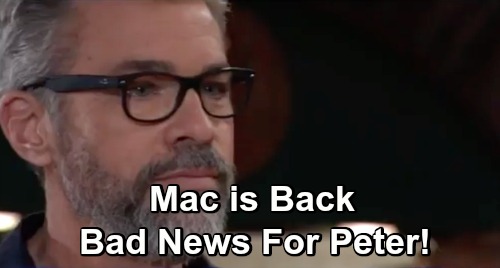 General Hospital (GH) spoilers tease that Mac Scorpio (John J. York) will soon get a new gig. Ever since Jordan Ashford (Briana Nicole Henry) got seriously injured and had to go on the kidney transplant list, Port Charles has been without a full-time police commissioner. Although Jordan has done her best to stay in charge and fulfill her duties, she’s going to have a long recovery time from her transplant surgery, and the city is going to need a fill-in commish.

And that’s where Mac comes in. As GH viewers know, Mac was police commissioner several years ago, before taking over The Floating Rib along with Felicia Scorpio (Kristina Wagner). In fact, it was back in 2012 when he left his commish gig, but according to General Hospital spoilers, he’ll be back in the top-cop seat very soon.

Mayor Laura Collins (Genie Francis) will soon approach Mac with the big request. She’ll need someone she can count on to fill in for Jordan for a few weeks while Jordan recovers, and she’ll know that she can trust Mac to do a great job. She’ll ask Mac to step in for Jordan, and he’ll be happy to help Laura out.

According to a recent interview n Soap Opera Digest, Mac’s portrayer, John J. York, says that he was overjoyed when GH’s Executive Producer Frank Valentini approached him about the storyline. And even though Mac’s gig as commish will be temporary, John’s excited about it. “I’m really looking forward to getting back in there,” John said. “It’s a whole new squad, a while new group of people.”

John also said in the interview that he enjoyed his scenes with Genie Francis, who portrays Laura. “Genie is an absolute blast to work with,” he said. “She has a great sense of humor.”

It will be great to see Mac back in action, it looks like he’ll soon become worried about Lulu Falconeri’s (Emme Rylan) new work assignment at the bequest of Peter August (Wes Ramsey). As GH viewers know, Lulu is currently going undercover to nab a man who approaches women on a dating app then robs them.

Lulu’s mission involves posing as a single woman on the dating app, which will worry Mac. Mac won’t like it that Peter is knowingly putting Lulu potentially into harm’s way, and that will make him wonder about Peter’s judgment. And that will get him wondering about whether Peter’s really such a good match for his stepdaughter Maxie West (Kirsten Storms).

We’ll see what kind of cases Mac gets to take charge of in the very near future! Will you be glad to see Mac back in charge at the PCPD? Stay tuned to the ABC soap and don’t forget to check CDL often for the latest General Hospital spoilers, updates, and news.