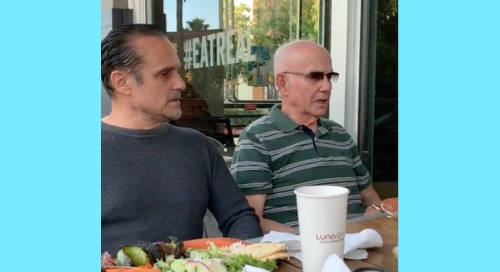 Benard posted a hilarious video on Instagram, which featured his dad discussing Jason and Carly’s strong bond. “What do you think of…Jason and Carly, their relationship?” Benard asked. His dad replied, “I hate it! You know why I hate it? Because Jason is Maurice’s best friend, but every time he sees Carly, they go like this.” He then grinned and mimicked how touchy-feely “Jarly” can get sometimes.

Benard’s dad apparently doesn’t think Jason and Carly should be doing all this hugging! Of course, it was all in good fun. Benard laughed at his father, who insisted he would feel the same way if his wife acted that way with another man. He thought General Hospital fans would get a kick out of the video, and he was right.

On Instagram, Benard posted the clip with a funny caption to exaggerate his dad’s claims. “GH TALK/Are JASON and CARLY secret lovers. There is only one person to ask. MY DAD #dad #cheating #betrayal #honesty…” After Benard shared it there along with a link on Twitter, GH viewers were quick to offer their thoughts. It was a big hit that many fans found themselves chuckling over.

One General Hospital viewer said, “Oh I could just kiss your Dad Maurice! He is honest and so cute. You give him a question believe me, you’re gonna get his answer!” “Your dad is such a doll, he makes a very good point about Carly and Jason,” said another. “Most men would not like their wife getting the kind of attention Carly gets from Jason lol”

Naturally, some fans pointed out that Carly and Jason love Sonny too much to cross the line. “Maurice, your Dad is adorable & so funny!” one viewer tweeted. “However I don’t think Carly would try to start anything w/ Jason, their friendship is too special…” Other GH watchers insisted Jason’s heart belongs to Sam McCall (Kelly Monaco), but it was still nice to see hear this amusing perspective on Sonny’s love life.

GH TALK/Are JASON and CARLY secret lovers💕💕💕. There is only one person to ask. MY DAD🙀#dad #cheating #betrayal #honesty #eat #generalhospital