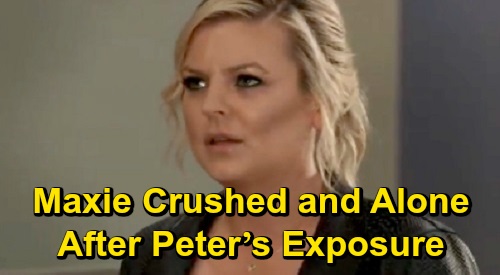 General Hospital (GH) spoilers tease that Maxie Jones (Kirsten Storms) has heartache in her future. GH fans know Peter August (Wes Ramsey) has gone to great lengths to keep his sinister secrets under wraps. If he’d just been honest with Maxie from the get-go, perhaps all this could’ve been avoided.

Maxie already knew about Peter’s involvement in the memory-mapping project. It would’ve been easy for Peter to explain just how involved he was. Maxie has always been quick to point out that Peter has changed. She undoubtedly could’ve gotten past Peter’s partnership with Helena Cassadine (Constance Towers) and any other dark parts of his past.

Maxie loves Peter for who he is now – or at least for who she thinks he is now. The trouble is Peter has taken terrible steps to cover everything up. In doing so, Peter proved that he hasn’t changed much at all.

It’s tough to believe Maxie can get over Peter latest round of deadly destruction. He’s the reason poor Scout Cain (Ella Ramacieri) lost her dad, Drew Cain (Billy Miller). As a mom, how can Maxie forgive that? Especially after what happened to Nathan West (Ryan Paevey)! After Nathan was shot by Cesar Faison (Anders Hove), Peter was eager to gloat about his father killing the wrong son. He’s always been a pretty nasty piece of work.

Of course, Peter can still be redeemed again if that’s the way GH wants to take things. However, let’s hope the “Paxie” ship has sailed. Maxie and Peter never had much chemistry to begin, so it won’t be any great loss. Besides, Maxie will look foolish and desperate if she takes Peter back after the truth comes out. She needs a guy who will be honest, respect her and treat her right. That’s obviously not Peter.

However, there aren’t a ton of options on canvas for Maxie. General Hospital seems pretty committed to building up Lulu Spencer’s (Emme Rylan) romance with Dustin Phillips (Mark Lawson), so Dustin’s out. Harrison Chase (Josh Swickard) could end up splitting from Willow Tait (Katelyn MacMullen), but there are other options like Sasha Gilmore (Sofia Mattsson) and Brook Lynn Ashton (Amanda Setton) to keep him busy.

Michael Corinthos (Chad Duell) is probably gearing up for a pairing with Willow in the new year, so let’s rule him out, too. Who does that leave for lonely Maxie? She’ll undoubtedly need time to heal, but perhaps she could get some help with that. Maybe Maxie will find love that’s been staring her in the face all along.

General Hospital has dangled the possibility of a Maxie and Chet Driscoll (Chris Van Etten) pairing in the past. Chet lost out to Peter, but it’s clear Chet is the better man. He’s a sweet guy who really cares about Maxie, so why not go all in on this? Chet and Maxie have proven that they sparkle onscreen together. He could be the perfect man to mend Maxie’s broken heart in the new year.

Do you hope Maxie finds love again in 2020? Would you like to see Maxie paired up with Chet or someone else? General Hospital spoilers say some hot drama’s brewing, so stay tuned. We’ll give you updates as other GH news comes in. Stick with the ABC soap and don’t forget to check CDL often for the latest General Hospital spoilers, updates and news.