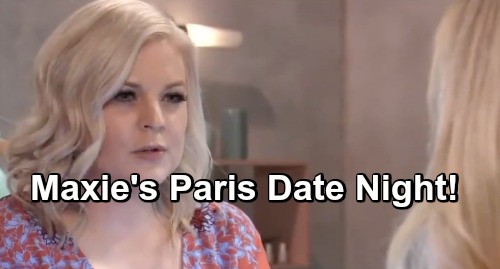 General Hospital (GH) spoilers tease that Peter August (Wes Ramsey) will push his fears aside and focus on what he wants. Of course, that’s a future with Maxie Jones (Kirsten Storms). Peter’s made it clear that he’s never felt this way about anyone before, so he’ll be all in after a pep talk from Anna Devane (Finola Hughes).

Maxie will be treated to the first date of a lifetime, so there’ll be plenty of surprises along the way. General Hospital spoilers say the destination will be the biggest shocker of all. Maxie will be taken aback when Peter announces that he’d like to whisk her away to Paris. He’ll think a romantic getaway is the perfect plan, so Maxie will make sure someone can watch James and get on board.

However, Maxie will have some minor concerns. She’ll worry that maybe Peter feels like he has to impress her. Maxie won’t want Peter thinking he has to do something so lavish to earn her approval. She genuinely just enjoys hanging out with Peter, so even a night at the Metro Court would’ve been fine.

Maxie’s comment will leave Peter wondering if he made the wrong call. He’ll question if all of this is too much for Maxie. Peter will hope he hasn’t made Maxie uncomfortable with his extravagance. He’ll contend that he just wanted to show her how special she is and let her know he’s committed.

Peter will even fear that perhaps Maxie’s having second thoughts about their relationship overall, but that won’t be the case. Sensing Peter’s freak-out, Maxie will quickly clarify. She’ll assure Peter that she appreciates the thought he put into this and wants to be right where she is. They’ll hope to make this a night to remember, so it’ll be interesting to see how far they go.

Will Peter and Maxie make love for the first time? It seems likely since GH is going to all this trouble for a Paris trip. They’re making a big deal out of this date, so the payoff needs to be big, too. General Hospital spoilers say Maxie and Peter could take some big steps forward. By the time they return home, their feelings should be stronger than ever.

Are you rooting for Maxie and Peter? Would you rather see Maxie with another love interest or is Peter her best option right now? We’ll give you updates as other GH news comes in. Stay tuned to the ABC soap and don’t forget to check CDL often for the latest General Hospital spoilers, updates and news.