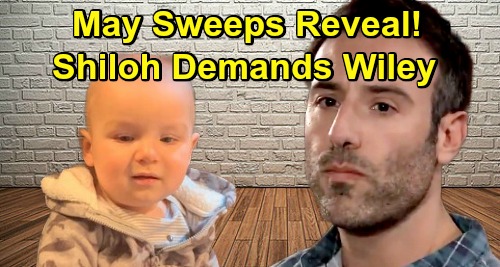 General Hospital (GH) spoilers tease that Shiloh Archer (Coby Ryan McLaughlin) will slowly inch toward “Wiley Cooper-Jones.” He recently held this little one during a chat with Brad Cooper (Parry Shen) at Kelly’s, but Brad has no idea just how dangerous it is to let Shiloh too close. That’s because GH has set up a very layered storyline with several complicated secrets.

Shiloh doesn’t know Willow Tait (Katelyn MacMullen) was pregnant when she left Dawn of Day, so he doesn’t realize she gave their son up for adoption. Of course, Brad doesn’t know Shiloh is the secret “baby daddy” and hasn’t told Willow that her kid actually died. “Wiley” actually belongs to Michael Corinthos (Chad Duell), so this story definitely has some surprising twists built in.

GH fans are eager to see the whole truth come out, but that’s not going to happen just yet. This is the kind of story that has to be peeled back bit by bit. There’ll be tiny little explosions before the biggest one of all – Michael’s baby bombshell.

That revelation may not come until much further down the road, but we still need some baby-related May sweeps shockers. Which characters will be taken aback during this period? If Brad lets himself get sucked into Shiloh’s web, there may be big problems. Willow pointed out that Shiloh likes to groom children while they’re young. He’s hoping to build up the next generation of DoD followers.

However, Willow will inevitably freak out and warn Brad if he gets mixed up in all this. A sudden change in Brad’s behavior would raise red flags for Shiloh. General Hospital spoilers say Harrison Chase (Josh Swickard) will keep an eye on Shiloh as well. This fierce detective will give Shiloh a stern warning on April 8.

Chase will make it clear that Shiloh needs to stay away from Willow, so Shiloh may wonder what she’s got to hide. GH will undoubtedly give Shiloh some puzzle pieces to put together. He also has a habit of showing up when people least expect it, so some eavesdropping is a real possibility.

What happens once Shiloh learns Willow gave birth to Wiley? Will he try to get custody of the phony one? There could surely be some issues since Willow did all this without Shiloh’s knowledge or consent. Even if Shiloh can’t win the case, he could set off a chain reaction of secret spillage.

Will this be the hot May sweeps material? Will things explode for Willow once Shiloh knows what she hid from him? Brad could be left in panic mode as the threat to his family grows stronger! We’ll give you updates as other GH news comes in. Stick with the ABC soap and don’t forget to check CDL often for the latest General Hospital spoilers, updates and news.