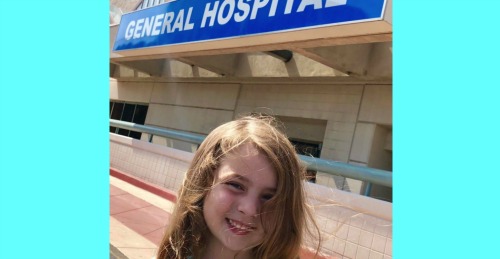 General Hospital (GH) spoilers reveal that there’s a new face in Port Charles. On July 1, GH fans quickly noticed Scout Cain was all grown up! The show aged the character a bit, which makes considering they recently did the same with Danny Morgan (Porter Fasullo). The role of Scout was previously played by Palmer and Poe Parker, but now five-year-old Ella Ramacieri has taken over.

Ramacieri posted about her new gig on social media. “I am so happy and excited to announce that I have the opportunity to join the @GeneralHospital family as #ScoutCain and work and act along the sides of the amazing cast and crew,” Ramacieri said through the Twitter account her mom runs. “Thank you to my angents @PalomaAgency for believing in me and for this opportunity of a life time!!!”

Plenty of General Hospital fans were pleased by the heartwarming scenes between Drew and Scout in Ramacieri’s first episode. Drew’s great in Daddy mode, so it was nice to see him interacting with Scout and making plans for the future. He promised that one day they’d make the journey to Oscar Nero Quartermaine’s (Garren Stitt) final resting spot on Mt. Kilimanjaro, which was quite touching.

Alexis Davis (Nancy Lee Grahn) was also sweet when she spoke to Scout and praised her brilliant artwork. We don’t get a chance to see GH kids very much, so it’s always a treat when they pop up and bring the cute factor. Now that Scout’s a tad older, let’s hope we’ll see more family moments with Drew as well as Sam McCall (Kelly Monaco).

On Twitter, General Hospital viewers had lots to say about Scout’s SORASing and her latest scenes. “Super sweet,” one GH watcher said. “I do want to see Drew’s bond with Scout evolve now that she’s aged. There’s something special there.” Another fan said, “Aww what a cute little girl playing Scout love watching her with her dad Drew and looks they aged her.”

General Hospital spoilers say Drew will continue to mourn Oscar and help Kim Nero (Tamara Braun) in any way he can. He’ll hopefully get involved in Shiloh Archer’s (Coby Ryan McLaughlin) takedown at some point since there’s a connection in their past. Most Drew fans are certainly rooting for him to get his memories back along with a strong story.

Are you glad Drew’s getting more time with his daughter? What do you want to see next for Drew? We’ll give you updates as other GH news comes in. Stay tuned to the ABC soap and don’t forget to check CDL often for the latest General Hospital spoilers, updates and news.

A smile is worth a thousand words, guess what I’m excited for?!?! @GeneralHospital #GH #GH55 #GHFamily #ScoutCain #thankful pic.twitter.com/O9EadoiXuB

I am so happy and excited to announce that I have the opportunity to join the @GeneralHospital family as #ScoutCain and work and act along the sides of the amazing cast and crew. Thank you to my angents @PalomaAgency for believing in me and for this opportunity of a life time!!!