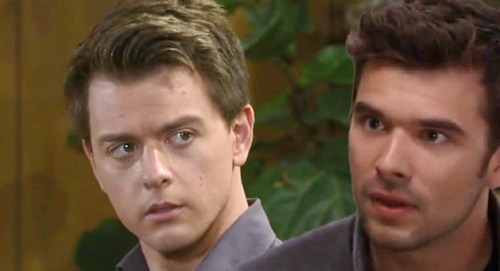 General Hospital (GH) spoilers tease that Michael Corinthos (Chad Duell) and Harrison Chase’s (Josh Swickard) “bromance” could fall apart! It was sweet to see Chase put his job on the line just to give Michael an alibi. Chase wanted to make sure Michael wouldn’t get in any trouble for his scheme in Beechers Corners.

GH fans know Chase and Michael became friends after they joined forces to trap Nelle Benson (Chloe Lanier). They’re also on the same side in the fight against Shiloh Archer (Coby Ryan McLaughlin). Chase knows Michael cares about Willow Tait (Katelyn MacMullen) and appreciates it. He doesn’t seem to view Michael as any kind of threat…yet. That could naturally change as the storyline begins to shift.

There’s no confirmation just yet, but it looks like the truth about Wiley Cooper-Jones’ death may come out soon. General Hospital spoilers for the week of July 8-12 certainly point in that direction. The fact that this “Wiley” is Jonah Corinthos should remain under wraps for a while longer, but there’ll still be drama due to the swap.

Willow will be devastated when she realizes the kid she’s been trying so hard to protect isn’t her kid at all. She won’t regret fighting for the safety of an innocent baby, but this will still be a crushing blow. Willow may find it easier to lean on Michael than Chase. After all, Michael believes he lost a child. Willow will likely gravitate toward Michael even more as she copes with her own loss.

Will Chase finally see the danger here? Willow’s already been confiding in Michael more often lately. She revealed far more about her father’s overdose to Michael than to Chase. There’s a certain level of trust and comfort that Willow feels with Michael. If they keep building on that, Chase will surely notice sooner or later. It could start quite a war with Michael!

Of course, many General Hospital fans aren’t going to be happy if Michael steals Willow’s heart. Chase has become the resident hunk to root for. His pairing with Willow is a popular one, so GH will be losing a lot of if they bail on “Chillow.” If Chase and Willow do break up, let’s hope their split will be a short one.

On the bright side, the drama should bring some good material for Chad Duell, Katelyn MacMullen and Josh Swickard. It’s always nice to see the GH cast shine. General Hospital spoilers say some fantastic stuff’s coming up, so stay tuned.

We’ll give you updates as other news emerges. Stick with the ABC soap and don’t forget to check CDL often for the latest General Hospital spoilers, updates and news.