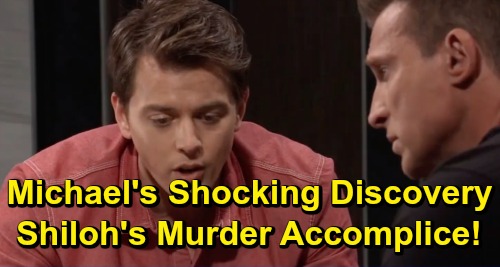 General Hospital (GH) spoilers tease that Jason Morgan (Steve Burton) will feel like Shiloh Archer’s (Coby Ryan McLaughlin) takedown is imminent. After Michael Corinthos (Chad Duell) reveals Willow Tait’s (Katelyn MacMullen) story, Jason will think this is exactly what they need. Shiloh was behind the murder of Willow’s father, so they just have to dig for clues and prove it.

Jason will want to dash over to Beechers Corners immediately and make this happen, but Michael will be the voice of reason. As much as Jason wants to be the one to handle this, he really can’t. Shiloh has plenty of law enforcement on his side in that area. Jason already faced some legal hiccups there, so Michael will think he should go in his place.

General Hospital spoilers say Jason will be wary of handing this task off to Michael. His priority is always protecting those closest to him, so he won’t want Michael getting caught up in anything dangerous. However, Michael will remind Jason that he’s just as invested in this battle. Shiloh hurt Kristina Corinthos-Davis (Lexi Ainsworth) and now he’s going after “Wiley Cooper-Jones.”

Once Michael makes a convincing pitch, Jason will get on board with Michael taking the lead. Even so, Jason won’t think Michael should head to Beechers Corners without backup. He’ll want to go along as a precaution and stay out of sight until he’s potentially needed. Jason will just want to make sure Michael’s protected.

GH fans can expect Michael to cave in on that, but he’ll still be taking charge of this mission. General Hospital spoilers say more digging will result in a new key player. Shiloh may have been to blame to Douglas Miller’s overdose, but he didn’t do it alone – and he certainly didn’t go down for it.

That’s why Michael will turn to someone who actually faced consequences. General Hospital spoilers state that Michael will reach out to a woman named Carol. It turns out she was arrested for providing the drugs that killed Willow’s dad. Of course, Michael won’t think that’s the whole story. He’ll feel confident that Carol knows something that could help them finally get justice.

Michael and Jason might even convince Carol to testify against Shiloh, but will she wind up dead before she has the chance? Time will tell, but General Hospital spoilers say danger will indeed erupt in Beechers Corners. Jason will land in a sticky situation, so Michael will manage to save him in a surprising role reversal.

It sounds like the excitement’s about to rev up. We’ll give you updates as other GH news comes in. Stay tuned to the ABC soap and don’t forget to check CDL often for the latest General Hospital spoilers, updates and news.