General Hospital Spoilers: Michael Gets Burned After Sasha Plays with Fire – Does Michael Deserve Happiness for Once? 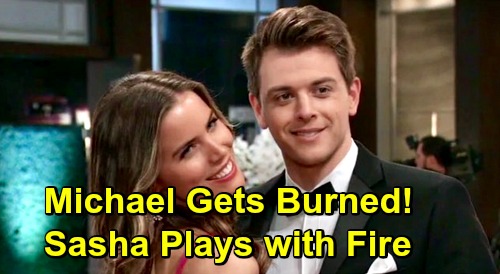 General Hospital (GH) spoilers tease that Nina Reeves (Michelle Stafford) will face a shocker on new GH episodes later this week, May 28-31, but it probably won’t be the one you’re thinking of! GH fans have been waiting for the big fake daughter bomb to drop, but it doesn’t look like it’s happening just yet. Instead, a different hurdle could put Nina and Valentin Cassadine’s (James Patrick Stuart) wedding plans on hold.

It seems the fate of Crimson may be in jeopardy due to an Aurora Media takeover. General Hospital spoilers point to a major business decision for Drew Cain (Billy Miller) and a new business venture for Jasper “Jax” Jacks (Ingo Rademacher). We know Nina and Maxie (Kirsten Storms) will scramble to form a plan after a rude awakening, so this lines up with some Crimson drama.

Meanwhile, that’ll allow Sasha Gilmore (Sofia Mattsson) to get a little too comfortable with her secret. She’s kept it quiet this long, so she’ll start to think maybe she’s in the clear. General Hospital spoilers say Sasha will let herself fall for Michael Corinthos (Chad Duell). They’ve kept things casual, but they’re about to head into much deeper territory.

Michael was the pursuer in the beginning, but Sasha will begin to take the lead more and more. During the week of June 3-7, Sasha will eager to enjoy a hot date with Michael. They aren’t exactly ready to throw around any love professions, but they will be if this keeps up. General Hospital fans can expect Sasha to ignore Valentin’s continued warnings and choose to play with fire instead.

Unfortunately, Sasha stands to burn not only herself but Michael. The poor guy’s already been through a lot of heartbreak throughout his previous relationships. Michael deserves someone he can trust and truly fall for, but GH is setting him up to fail once again. It’s a shame since Chad Duell and Sofia Mattsson actually have some nice chemistry.

There’s always a chance Michael will forgive Sasha eventually, but this is likely a way to make him single again for Willow Tait (Katelyn MacMullen). General Hospital spoilers say some serious Shiloh Archer (Coby Ryan McLaughlin) obstacles are headed for Willow and Harrison Chase (Josh Swickard). He’ll definitely manage to affect their romance in the months ahead.

As Willow and Chase’s bond crumbles, Sasha may give Michael the out he needs. The revelation that she’s a lying con artist could send Michael down a new path and leave Sasha devastated. Are you ready for Michael to have a happy relationship for once?