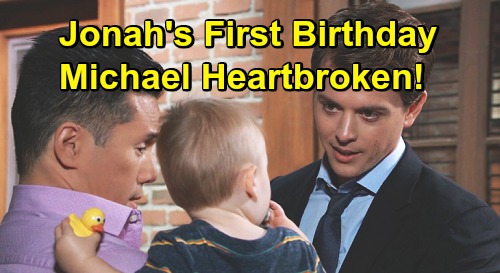 General Hospital (GH) spoilers tease that Michael Corinthos (Chad Duell) will be feeling reflective. It’s now been a year since his son Jonah Corinthos was born and, as far as Michael knows, died. Of course, GH viewers know that Jonah didn’t die but was given to Brad Cooper (Parry Shen) by Nelle Benson (Chloe Lanier) after Wiley Cooper-Jones tragically died of Sudden Infant Death Syndrome. The baby swap has been kept well-hidden ever since.

According to GH spoilers, Michael will spend some time reflecting on what would have been Jonah’s 1st birthday. He’ll surely be able to help celebrate “Wiley’s” birthday, but that will surely bring up some sad feelings about what might have been, had Jonah survived.

Ironically, Michael has received great comfort in being “Wiley’s” godfather during the past year, not knowing that the child who Brad is passing off as Wiley is actually Jonah. He’s doted on “Wiley” and now is working feverishly to keep Shiloh Archer (Coby Ryan McLaughlin) – who was the original Wiley’s biological father – away from the little boy.

But GH viewers are starting to wonder when they’ll finally see a big reveal and an end to the baby swap storyline. After all, Michael has now been deprived of his son for a year, and we’ve been watching Brad freak out over the secret he’s been keeping for far too long. It seems like something’s got to give soon!

It seemed like we were about to get somewhere when Shiloh stole a baby blanket from Brad and used it to get a DNA test, but the results were subsequently ripped up by Lucas Jones (Ryan Carnes) after Shiloh was arrested. And of course, Lucas didn’t even bother to read the results first, since he just assumed that the results would show that Shiloh was “Wiley’s’ father.

And viewers got another tease when Liesl Obrecht (Kathleen Gati) got inebriated and started babbling to Franco Baldwin (Roger Howarth) about how Brad and Lucas might lose “Wiley” to his real father. Franco’s interest was piqued and he later questioned Liesl about what she was referring to. Hopefully, Franco will keep pressing Liesl about the matter, rather than letting it drop and frustrating viewers.

Or perhaps Nelle herself will do something to tip off Michael that something is awry with “Wiley.” According to General Hospital spoilers, Nelle will continue to harass Michael from Ferncliff, where she’s currently being held. As she’s demonstrated in the past, Nelle enjoys making cryptic comments about Wiley and Jonah, but so far Michael hasn’t picked up on her hints.

GH viewers will have to wait to see whether we see any significant movement in this storyline soon. One thing’s for sure – fans are ready to see Michael finally get reunited with his son, as well as for Brad to finally get what’s coming to him for his role in keeping Michael from his boy.

Do you think that we’ll see a resolution to the Wiley/Jonah swap anytime soon? Stay tuned to the ABC soap and don’t forget to check CDL often for the latest General Hospital spoilers, updates, and news.