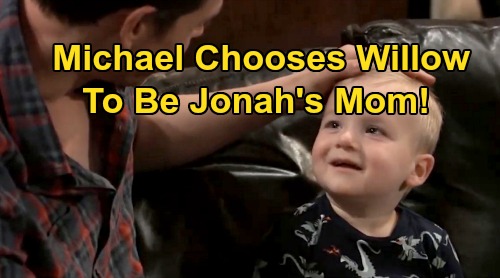 General Hospital (GH) spoilers tease that Willow Tait (Katelyn MacMullen) will have a lot to mull over. GH fans know Willow just cleared up a pregnancy scare. She admitted she was afraid to take the test because neither outcome was a good one. Willow wasn’t keen on having a baby turn her life upside down, but she also knew she’d be disappointed by a negative result.

As Willow herself predicted, she indeed seemed a bit disappointed by the false alarm. Willow assured Sasha Gilmore (Sofia Mattsson) is was the preferred outcome for now, but her eyes betrayed her. There was some pain in them since she’s not carrying a baby that’ll be hers to keep.

Willow feels like it’s always going to be hard watching “Wiley Cooper-Jones” (Erik and Theo Olson) grow up from afar. She’s been promised that she can be part of “Wiley’s” life, but it’s not the same as serving as a true mother. Brad Cooper (Parry Shen) and Lucas Jones (Ryan Carnes) are “Wiley’s” parents – at least they are right now.

Of course, that’s going to change once the truth about “Wiley” finally comes out. It’s in the hands of comatose Lucas at the moment, but you can bet the bomb will ultimately drop hard. General Hospital fans know Willow already went through the grief of losing Wiley in a way. She attended bereavement meetings because she couldn’t find the right group for her. Willow was just trying to come to grips with giving up Wiley for adoption. Little did Willow know her son was indeed dead.

Once Willow realizes the child she’s bonded with isn’t the one she gave birth to, she’ll be completely shattered. It’ll be like experiencing her initial loss all over again – only this time, it’ll be far worse. Will Willow even want kids after this crushing blow?

It’s common for some women to endure so much sorrow over the loss of a child that they don’t want to risk it again with another pregnancy. That’s also an especially popular soap trope that could be useful here. Willow may push Harrison Chase (Josh Swickard) away out of fear she’ll get pregnant again. She may also create distance simply because she no longer feels she can give Chase a family.

Michael Corinthos (Chad Duell) will be busy blowing his top for a while, but he’ll surely reach out to Willow once he’s done blasting Brad and Nelle Benson (Chloe Laner). After Jonah Corinthos settles in with his bio dad, Michael may suggest Willow can still be a mom to the boy they both love. Willow might even admit she still feels like Jonah’s mother. Her maternal instincts won’t turn off just because their DNA connection is gone.

Nelle certainly isn’t a suitable mom for Jonah, so he’s still going to need one. Throwing a kid in the mix could be something that rocks Michael and Sasha Gilmore’s (Sofia Mattsson) relationship – particularly if Michael’s letting Willow play Mommy as expected. GH has established a nice friendship between Sasha and Willow, but it could be strained due to Willow’s growing bond with Michael.