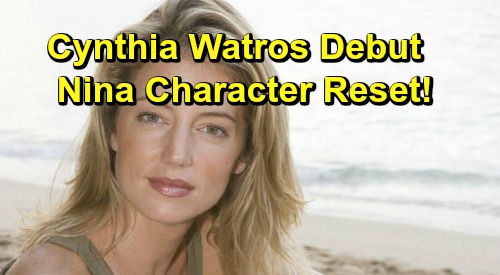 General Hospital (GH) spoilers tease that Michelle Stafford’s upcoming exit will present an opportunity for the ABC soap. Many GH fans will be sorry to see Stafford’s version of Nina go. Others won’t miss her and have complained about the show recasting at all. Nevertheless, General Hospital is moving forward with some Nina stories, which means Cynthia Watros can put her own spin on the role.

Of course, this could be a chance at a Nina reset. What worked for Stafford may not work for Watros. Nina always seemed to find her way back to Valentin Cassadine (James Patrick Stuart), which might’ve had something to do with Stuart and Stafford’s rapport. They were always quite vocal about how much they loved working together.

Stuart tweeted to Watros when she got the part and let her know he was a big fan, but that doesn’t mean “Valentina” will press on. General Hospital spoilers say this couple will implode over the secret regarding Sasha Gilmore (Sofia Mattsson). Can they come back from a blow like that? They could, but should they? That’s something GH will have to decide once Watros is playing Nina.

It’s possible General Hospital will choose to shake things up and let Nina lean on someone else. They could go for a brand-new pairing or one that Nina’s been in before. Either way, Watros’ arrival provides a bit of a new beginning for Nina. GH writers can reinvent her if they choose to.

This could actually make sense for the story since Nina’s world will be turned upside down. The bombshells she’ll have to face should affect her deeply. General Hospital may not do a total overhaul of Nina since she still has to be recognizable, but we should still see new shades of her. It’ll be interesting to find out what path GH has in mind for Nina once Watros officially takes over.

Are you glad General Hospital recast the part of Nina? Are you looking forward to Watros’ arrival or are you too bummed about Stafford’s exit? What kind of stories, pairings and personality adjustments do you want for Nina moving forward? We’ll give you updates as other GH news comes in. Stick with ABC soap and don’t forget to check CDL often for the latest General Hospital spoilers, updates and news.